Feisty teenage thief Maeko and her maybe-more-than-friend Chaff have scraped out an existence in Victorian London’s gritty streets, but after a near-disastrous heist leads her to a mysterious clockwork cat and two dead bodies, she’s thrust into a murder mystery that may cost her everything she holds dear.

Her only allies are Chaff, the cat, and Ash, the son of the only murder suspect, who offers her enough money to finally get off the streets if she’ll help him find the real killer.

What starts as a simple search ultimately reveals a conspiracy stretching across the entire city. And as Maeko and Chaff discover feelings for each other neither was prepared to admit, she’s forced to choose whether she’ll stay with him or finally escape the life of a street rat. But with danger closing in around them, the only way any of them will get out of this alive is if all of them work together.

Steampunk fiction has been around for years but began to be really popular about 10-15 years ago. I had read a few pieces before then but I really fell into it with authors like Gail Carriger, S.M. Stirling and Cherie Priest. I gravitate towards fiction that is a mishmash of subgenres and steampunk does that very well, frequently being a blend of science fiction, mystery, dark fantasy, alternate history, maybe even post-apocalyptic and a few other elements. i liked it so much that, after a while, I sort of ran out of, er…steam (pun intended)…and I haven’t read much of it in several years.

Still, I hadn’t given up on it so I was really happy to get the chance to dive into this world again with The Girl and the Clockwork Cat, hoping I would find it as entertaining as ever. I’m happy to say Ms. McCormack didn’t let me down  🙂

This author has two particular strengths. One is her worldbuilding and setting. Ms. McCormack’s descriptive abilities bring her idea of Victorian London to life and is solid enough to also evoke the settings of some of the best Victorian-era mysteries by such authors as Anne Perry and Will Thomas.  It also doesn’t hurt that Maeko finds herself right smack in the middle of an intense mystery that really engages her intelligence as well as street smarts.

The author’s other main strength is in her characters who are vivid and engaging, even those who can’t be considered likeable. Maeko is a heroine anyone can admire and feel an attachment to and the two guys in her life, Chaff and Ash, will stick in my mind for quite a while. They’re not perfect by any means, thank heavens, and there are times when Maeko is leaps and bounds ahead of them, but I do like them a lot.

Then there is Macak, a very unique cat with a mechanical leg. Macak is a delight, a kitty with some unique qualities, and he can hold his own when he needs to, not to mention lend a comforting purr from time to time. He is now one of my favorite fictional cats and, if nothing else would draw me back to a possible sequel, he would. I do hope there will be more of Maeko and Macak and their pals. Please, Ms. McCormack, bring them back to us!

Oh, and by the way, if you love cats and pictures of cats as much as I do, you really have to check out her website  ;-))) 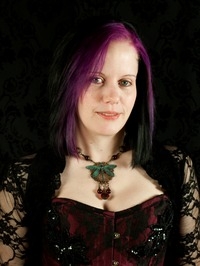 Nikki started writing her first novel at the age of 12, which she still has tucked in a briefcase in her home office, waiting for the right moment. Despite a successful short story publication with Cricket Magazine in 2007, she continued to treat her writing addiction as a hobby until a drop in the economy presented her with an abundance of free time that she used to focus on making it her career.

Nikki lives in the magnificent Pacific Northwest tending to her husband and three cats suffering varying stages of neurosis. She feeds her imagination by sitting on the ocean in her kayak gazing out across the never-ending water or hanging from a rope in a cave, embraced by darkness and the sound of dripping water. She finds peace through practicing iaido or shooting her longbow.