This, the third novel in his Troubles Trilogy, is the darkest and the most complex. It is not devoid of humor. Sean Duffy, a cop in the protestant Royal Ulster Constabulary, (RUC) has finally seen his attitudes and conflicts within the police hierarchy come back to haunt him. He’s chucked out of the force on a trumped up charge. A few weeks later, MI5 comes calling. So right away readers may wonder about that charge of hit and run.

This all sets the tone of this dark novel about the conflicts between warring sides in the Irish Troubles of the Nineteen-Eighties. Duffy, a Catholic in a protestant-dominated landscape, sees old school friends escape from prison, sees them die in fights with occupying British Army units and the RUC and wonders about the morality, the ethics of it all, and he sees the ruination of a society he truly loves.

A master bomber of the IRA, a dangerous man Duffy knew well, escapes from prison and Duffy is recruited to find him before his potentially high-profile act of ultimate destruction can be carried out against Her Majesty’s Government. Will Duffy find the right threads? Will his fascinating interactions with old and new characters result in success? Or will he become a witness to horrific failure?

Well-written, well-organized this taut dark novel is truly a gripping experience. McKinty is a fine writer with penetrating insights into the makeup of all kinds of people involved in the Irish scene at that time. It is fiction, but the stunning climax will remain with many readers for a long time. As it should. For though the novel is set in the previous century, it has much to say about our troubles of the present time. 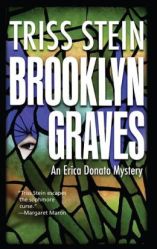 This novel is the second Erica Donato mystery, and, like the first, Brooklyn Bones, it’s not all about a contemporaneous crime, but involves the past.  In a way, this is fitting, since the protagonist is working on a PhD in history.  As in the first in the series, it takes place in Brooklyn, NY, home of the Green-Wood cemetery, where many Tiffany windows adorn mausoleums, and Brighton Beach, home to numerous Russian immigrants and nicknamed Little Odessa.

The plot involves the murder of a Russian immigrant, Erica’s friend and the father of her daughter’s friend, whose second job was as a night watchman at the Green-Wood cemetery, and the theft of a Tiffany window from one of its mausoleums. This gives the author the opportunity to delve into history, as she reviews century-old letters of an artist who worked for the famed glassmaker.

The story moves a bit slowly, weighed down by Erica’s personal life, complicated by her widowhood, the pressures of her studies, her own insecurities, and the raising of her 15-year-old daughter.  But in the end, as Thomas Wolfe wrote, “Only the Dead Know Brooklyn.”  Yet Triss Stein is carving out that territory as her own.