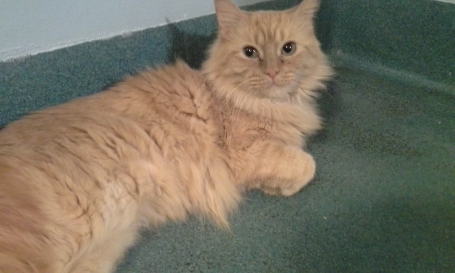 Yesterday, my daughter, Annie, and I took my four-footed sweet baby, Vivian, to the vet for her last visit. Those of us who are pet moms and dads dread having to do this but we owe it to take care of our “kids” to the very end.

Vivian was special. Yes, I know, everyone’s pets are special ;-). It’s true, though, that Vivian was different from most cats if only because she and her sister, Giselle, have openly loved us and have shown it over and over since they came home with me just before Christmas 2013.

We don’t know much about Vivian’s early life; she and Giselle were raised by an unknown woman in a motel for their first six years and then she disappeared one day. The motel owner called animal control and the Ginger Twins, as we called them, ended up at the SPCA. When we first saw them, they had been there four months and had limited prospects of being adopted. The biggest problems?

1. At seven years old, they were considered seniors.

2. There were two of them and the SPCA wouldn’t let them be separated.

3. Vivian was a mammary cancer survivor but her long-term outlook was not good.

Many of our local shelters, including the SPCA, are no-kill so Vivian and Giselle were not in danger but I couldn’t get them out of my mind. They were meant to come home with me so Annie and I went back to get them.

The twins were rarely far apart and were happiest when they snuggled together. Both loved looking out the windows and loved playing with the laser pointer and dangly ribbons, preferably the shiny kind. They loved to eat and they put on a few pounds but that was OK—they were a little on the lean side at the shelter.

The twins had not been spayed before arriving at the shelter and that’s when Vivian’s cancer was discovered. Mammary cancer is especially virulent and survival time is limited. When we took the girls to our vet for their first visit, he said it was not a matter of “if” it would recur but “when”. Two months later, the cancer was back and she had a second extensive surgery. That was in March and, a couple of months later, she was showing signs that something might be wrong again. At that time, I decided not to put her through all the diagnostic tests and possible surgery a third time.

A week ago, it became obvious that Vivian was in distress so we took her in on Friday. As it turns out, the mammary cancer was not evident again but it had metastasized to her lungs. There really is no coming back from that. Vivian came home for a last weekend and we had some really good quality time with her, knowing we’d have to take her back on Monday because, despite any rallies she might have, she was in pain and it was the right thing to do for her.

My heart hurts for Giselle. There’s no doubt she knows and she has been velcroed to my side for hours. She and everyone who knew Vivian will miss her terribly and I’m so very thankful she was in our lives for the past eight months.

Vivian has brought us all a lot of tears but also so MUCH joy. The rewards of rescuing seniors outweighs all of the heartache and I’ll do it again when the time is right.

Rest in peace, my sweet Vivian.