Scared to Live marks the return of DS Diane Fry and DC Ben Cooper, the protagonists of this wonderful series by Stephen Booth. At the outset Diane is called to the scene of a fire which Diane by some instinct deems suspicious, though there is no immediate evidence to support that conclusion. A woman and two of her children have died in the blaze; the husband was not at home at the time and the daughter was at the home of her grandparents, so those family members were spared. Shortly thereafter Ben investigates the death of a middle-aged woman, apparently a recluse, shot to death with a high-powered rifle in the home where she had lived for the past ten months, with no sign of entry into the house. There are no clues as to who might have done it, much less what possible motive there could have been. The woman had been so alone and without human contact that her body had lain undiscovered for more than a day. These two incidents could not appear to be more different, one of three members of a family in a well-off rural community and the other of a middle-class ‘spinster’ on an Edendale housing estate. But as the investigations proceed, it seems there might indeed have been connections.

There is a wonderful sense of place throughout the novel, with lovely descriptive prose enabling the reader to easily visualize the Edendale area of Ben’s birth, the villages of the Peak District and the old mills once so prevalent there: “The back wall of the mill overlooked the river. Its five stories were full of windows – – long ranks of them separated into pairs by stone mullions. They were spaced with Victorian precision, but so small and dark that nothing was visible behind the glass. Those windows stared out across the rushing water like blank eyes. There were scores of them, a hundred pairs of eyes – a high, brick wall full of dead faces.” There are also fascinating tidbits of local history and folklore.

The proverbial ‘fly in the ointment’ is a common enough phrase, but it took this author to conjure the picture of “a tiny fly twitching its wings in the ointment.” I thoroughly enjoyed this book as much for its excellent plotting as for the author’s continuing development of the protagonists, individually as well as playing off each other, the latter made that much more interesting for the fact that Diane is Ben’s boss. The point is often made here that “emotions always interfere with rational behaviour,” exemplified in more than one of the characters. The book is highly recommended. 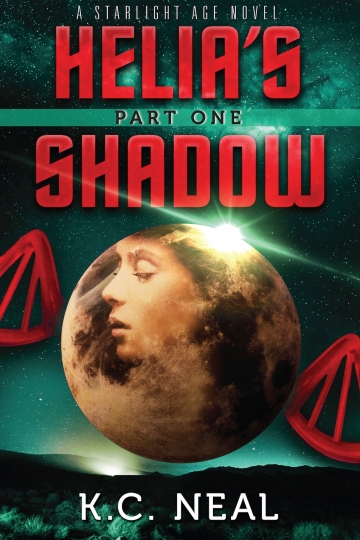 Nineteen years ago, aliens arrived on a dying Earth with advanced
technology and the promise of ensuring human survival in exchange
for a place to settle. They were hailed as the saviors of humans and Earth.

Today, 16-year-old Helia wants two things in life: to step out of her
over-protective mother’s shadow and become an engineer, and to stop
hiding her romance with alien boy Kalo. But the world definitely isn’t ready
for a human-alien romance. And worse, the human-alien partnership is
crumbling. Humans are being arrested without explanation.
Some of them are never seen again.

When the alien leader imprisons her mother on a false charge, Helia
discovers the aliens never intended to help humans at all. Now, she
must join forces with alien rebels and convince the young rebel leader
that humans aren’t expendable. If she succeeds, humans have a
chance at survival and she has a chance at love. If she fails,
the dwindling human race dies out in slavery.

—
Watch for the Helia’s Shadow ARC on NetGalley in September! If you’re
not on NG, sign up for K.C. Neal’s newsletter for a chance at a limited
number of ARCs for non-NG reviewers (and giveaways,
sneak peeks, and other goodies!).

K.C. Neal works in publishing and writes YA books. She likes to surf and hang out on sandy beaches, where drinks are served adorned with tiny umbrellas. When she’s not taking tropical vacations, she paddleboards, reads, writes, gardens, watches too many things on Netflix, and tells her dog, Oscar, how adorable he is.