Peggy Hanson is an author and travel blogger who loves to share her international life with her readers. Peace Corps, Voice of America, teaching of English–all these have played major roles in her life. Growing up in a series of small towns in Colorado, the daughter of a mountain-climbing Congregational minister and teacher, probably helped mold her affinity to nomadism. In her adult life, she’s lived for extended periods in Turkey, Yemen, India and Indonesia. 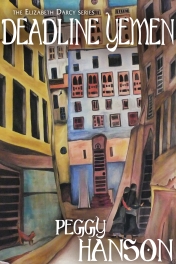 Her first two books are mysteries in the Elizabeth Darcy series set in other countries: Deadline Istanbul and Deadline Yemen. She is currently working on the third in that series, Deadline Indonesia, and is also compiling and editing her great aunt Mary’s diaries and letters and pictures from 1888-1920 when she was a missionary teacher and principal in the Balkans. The working title of the diaries is Miss Matthews of Macedonia. It is a story of early feminism and a woman’s bravery in the face of war.

I took all the new caftans to my laundryman a couple of little streets away from the hotel before even giving them as gifts. They looked and felt like good Egyptian cotton, but one can never be sure. Also, would the colors bleed? Mr. Magdy would know just how to handle them for their first washing. 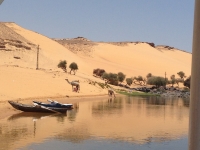 Camels and the Nile Near Aswan

Egypt is one of the most fun places in the world to shop! Naturally, one starts in the Khan el Khalili in Cairo, that warren of tiny streets and alleys filled with tee shirts, gaudy dresses, memento pyramids and the ever-present cat god, Bastet. If you spend enough time and go about things correctly, you may even find treasures. For example, you can often make friends with vendors by just shooting one-liners to match theirs: “Please give me all your money!”

“I have exactly what you are looking for!”

“I have to admit you’re ahead of me there!” 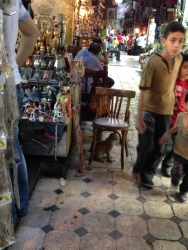 The more vulnerable you look, the more pestering you will get from the vendors. The key is to look them straight in the eye, smile, and confidently stride ahead. Unless they actually do have something you want, in which case it’s wise to say “I’ll be back later, inshallah (God willing)” and they may come running with a better price.

On this trip, I found some genuine treasures (almost museum pieces) by asking someone who was trying to sell me perfume bottles, “Where can I get an old dress?” Not missing a beat, the young guy took me to the same antique dealer I had bought something good from a few years ago. He tried to stand around to get a commission from the antique dealer, but was unceremoniously shooed away by Ahmet. “You don’t know this man, I don’t know this man, he does not belong here.” 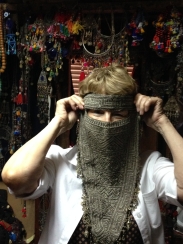 And so, after a little discussion of the famous but remote Siwa oasis in the Western Desert (you MUST do some research before you shop at the Khan el Khalili) Ahmet began pulling out things he thought I’d like. And I did. How I did! A well-made cotton Bedouin dress with intricate handwork all over it. Probably 70 years old. A silver beaded face mask from the mysterious and notorious Raishida tribe along the Egypt-Sudan border. Yes, a dress from Siwa to go with the one I bought years ago and wear often. And a rare Bedouin jacket, again with beautiful work on it. The prices are not at all bad, considering they might be ten times that at Neiman Marcus.

Because Egypt has been deemed a security risk for the last three years, almost no tourists are here to compete with me for the best things in the Khan. There are other advantages that accrue, as well. “You are American?” they cry. “We love Americans!”

Because it is the holy month of Ramadan, when everyone fasts from dawn to dusk and parties all night, people are in a spiritual and kindly frame of mind—with the possible exception of taxi drivers in the late afternoon who have had no refreshment or a cigarette all day and are now enmeshed in an unbelievable crunch of traffic. When we visit the Khan el Khalili in the evening to have dinner at the beautiful haven of the Naguib Mafouz café (named after the Nobel-prize-winning author who had his coffee there in the old days and said it was the only place that would give him coffee on credit before he published his books) we are welcomed as guests in a home, and offered the traditional iftar menu the Moslem fasters among us eat to break their fasts: tasty broth, dates, juice and grilled meats.

Oh, yes. Back to those caftans. I got them in a shop not in the Khan. I have worn mine several times. They do not shrink and the colors do not bleed.

And this is barely scratching the surface of what a shopper can find in Cairo!

Do your research. Find out how to dress and behave in Egypt. Check on the situation on the ground. Then come and have a glorious time, even in mid-summer or during Ramadan or when the State Department doesn’t advise it. Egypt has everything!

Evening on the Nile