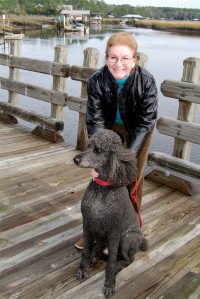 Retired journalist for The Atlanta-Journal Constitution, in 2009, Gerrie Ferris Finger won The Malice Domestic/St. Martin’s Minotaur Best First Traditional Novel Competition for The End Game, released by St. Martin’s Minotaur in 2010. She grew up in Missouri, then headed further south to join the staff of the The Atlanta Journal-Constitution. There, she researched and edited the columns of humorist Lewis Grizzard and co-wrote a news column with another reporter for three years. The series that started there is still going strong today. Running with Wild Blood is scheduled for release in January 2015.

I love radio and do a lot of it. I freely admit I wasn’t too good at it in the beginning.

You would think that since the term “talking points” comes up often, speakers—be they on television, behind a live lectern, or on radio—would know and research how talking points could benefit their own presentations. Some recent talking points were spoken of in the negative, but I’ve learned to put them to good use.

Before I devised talking points, I dove into radio with a bio in front of me, a Q&As list if the station asked for one, and a synopsis of the novel.

I found myself wandering off the subject, getting tongue tied because I realized I didn’t need to read everything in the synopsis. In fact, my gracious hosts often interrupted my faltering voice and changed the subject to something like my bio. I found I never got to the main plot points or crux of the synopsis.

Hosts are like that. They try to keep guests on point and not babbling. If hosts have read the novel, and some have, they will fill in the high points. If not, they’ll move on to why you write mysteries. I’m not trying to sell my bio or the reason I write mysteries, but my novel. And am doing a poor job of it.

I have mended my ways. I now know that talking points are an easy way of staying on track and getting a clear message out. If you haven’t tried talking points, you can learn from my experience.

Take it to the bank: anything read word for word is boring to radio listeners.

Talking points are prompts. I know my novel’s plot, its characters and theme. A line or two will keep me precise.

You can go astray with talking points by making them too long; that’s as bad a reading a synopsis.
Bullets are good, but looking at too many causes confusion.

Make sure you’re doing talking points and not talking paragraphs. Break it up.

Do not bury the main points or list them last. We journalists call it “burying the lede,” and yes, we spell “lead” like that.

We also call the second paragraph in a news story the nut graf. “That’s a journalism spelling, too. The nut graf holds the promise of what’s to come—in a nutshell. Keep it up top of talking points.

Do not italicize, bold underline or use explanation points. Talk about confusing!

Some like to use sub-bullets. All right, I guess, if it’s a long speech and the main points need support.

Those are just a few suggestions. Many speech-writing books will help make your presentation on radio, television and stand-up succeed.

Here are my talking points for my new book, MURMURS OF INSANITY.

*
Moriah Dru and Richard Lake, a child finder and a cop, team up to solve two crimes in this 4th mystery in the series.

*
Case one begins when Johndro Phillips goes missing after witnessing a drug deal turned bad in his Atlanta neighborhood.

*
The second case involves an avant garde art scheme at the University of Georgia in Athens, near Atlanta.

*
The center of this case is Baxter Carlisle, a middle-aged Athens landowner and restaurateur.

*His predilection for young women has gotten him mixed up with the student art community, particularly with a young, mysterious woman named Cho and her boyfriend Damian.

*If you wonder about the cover, Dru learns that Baxter possesses one of the world’s most extensive doll collections.

*Damian, Cho and their friend Arne have devised a Performance Art scheme meant to shake-up the tranquil community.

*Articles of Damian’s are found on nature trails from Athens to Atlanta. Absent a body, the police think it’s a treasure hunt. Dru thinks not.

*The art scheme goes awry when Arne is found hanged and Cho disappears.

*Meanwhile, Dru is called back to Atlanta because Johndro Phillips witnessed a murder and is in fear of his life.

*Following a search and rescue dog’s nose, she finds where Johndro and his cousin are hiding.

*In a gun battle, the bangers are shot by Dru and Lake.