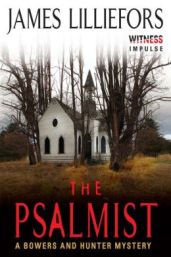 Luke Bowers is in the good and evil business.

On a cold, late-winter morning in the Chesapeake Bay community of Tidewater County, Bowers discovers a dead woman seated in a pew at the church where he is pastor—her eyes open, her hands clasped as if in prayer.

Nothing at the scene identifies the woman or explains why she was at the church. And when state police homicide investigator Amy Hunter comes to town to head up the case, not everyone is pleased that a young, female outsider has the job. The only lead in solving the crime is a sequence of numbers that has been carved into the victim’s right hand, which Bowers suspects may be a reference to the Book of Psalms.

With Bowers’s help, Hunter follows a chain of seemingly innocuous clues to track down a deranged serial killer and unravel an elusive criminal enterprise that is more powerful than they ever could have imagined.

It’s been done before, the pairing of a police detective and a clerical (religious) civilian to solve crimes. Probably the most noted and admired of these is the series by Julia Spencer-Fleming featuring Police Chief Russ Van Alstyne and Reverend Clare Fergusson and it’s difficult to avoid comparing The Psalmist with that series…so I won’t even try ;-). Put simply, Luke Bowers and Amy Hunter may share professional occupations with their “colleagues” but that really is where the comparison should end because Luke and Amy have earned their own place in the fictional investigative world.

When Luke finds a woman’s body in his church, he’s remarkably calm, perhaps reflective of his being a pastor, and he immediately alerts the authorities. In the small Chesapeake Bay town where everybody knows everybody, the local sheriff has to turn the case over to a state homicide investigator, a woman no less, and Amy Hunter has to cope with local resentment. When she begins to develop information that may tie this murder and others to the Book of Psalms, with help from Luke, it flies in the face of the way Sheriff Calvert and State’s Attorney Wendell Stamps seem to want the case to go. Tensions begin to rise and indications that a serial killer may be at work only make things worse.

Then the FBI steps in and, suddenly, this woman’s death is part of something much, much bigger but it’s a different rush to judgement that Luke and Amy must find a way to prevent. Whether they’ll be able to do so is a good question but one thing is sure—the violence is not over yet.

Amy and Luke are both very likeable characters and I especially appreciate that Luke doesn’t insert himself every step along the way. Amy is a dogged detective with a real talent and intelligence but Luke adds to the investigation with his own special knowledge and his ability to think things through. They work well together and I plan to see what happens in their second case…or perhaps more of this one.

JAMES LILLIEFORS is a journalist and novelist who grew up in the Washington, D.C. area and currently lives and works in Florida. He has written for numerous publications including The Washington Post, The Miami Herald, The Boston Globe and the Baltimore Sun. He started his journalism career as a writer and editor for Runner’s World magazine and worked for many years as a newspaper editor and reporter, in Maryland and in Florida, winning a number of reporting awards. Since the late 1990s, Lilliefors has been head writer at the Philharmonic Center for the Arts in Naples, Florida. He is the author of several non-fiction books, including AMERICA’S BOARDWALKS, BALL CAP NATION and HIGHWAY 50, as well as a satirical mystery novel, BANANAVILLE.

Catch Up With JAMES LILLIEFORS:

2 thoughts on “Book Review: The Psalmist by James Lilliefors”