All her life Thalli thought she was an anomaly. Now she must use her gifts to fulfill the role she was called to play: Revolutionary.

Back in the underground State against her will, Thalli is no longer the anomaly she was before. She has proven herself to be a powerful leader aboveground and returns with information that Dr. Loudin needs to complete his plan of uniting the world under one leader: himself. But he, too, has information. A secret he has kept from Thalli her entire life. A secret that, once revealed, changes everything about the person Thalli thought she was.

Hoping to help Thalli rise up against the Scientists, both Berk and Alex join her underground, but their presence only brings more trouble for her. Now Dr. Loudin knows just the leverage to use on his captive, and she is forced to choose between the two of them. Is her first love her true love? Or does Alex ultimately claim her heart?

Unsure of everything around her, including her own identity, Thalli doesn’t know where to turn. She knows she needs the Designer, but he seems further away than ever. What she does know, though, is that if she doesn’t do something to stop Loudin, the fragile world aboveground will be lost once and for all.

Good versus evil is at the core of the Anomaly Trilogy and everything finally comes to a head in Revolutionary with a mixture of battles and introspection and, in Thalli’s case, a lot of questioning about her faith. A theme such as this one always has a religious flavor to it and there’s plenty of it here but Ms. McGee has wrapped it in a thrilling dystopian that kept me on the edge of my seat after a little bit of a slow start.

Loudin is the very personification of evil but, at the same time, he made me reflect on our current society’s predilection towards excusing terrible behavior based on something like a rough childhood or mental abnormalities. Yes, it’s true that Loudin is clearly insane—he gives new meaning to “megalomania”—but, when you get right down to it, he’s just plain evil. Ms. McGee has drawn him so evocatively that I would get a chill down my spine every time he came on the scene, wondering what horrible plan he’d come up with this time.

The relationships between Thalli and the two young men in her life, Berk and Alex, are really interesting. It eventually becomes clear that she loves one but there is no doubt whatsoever that both are integral parts of her being and she cares deeply for both. The romance has developed naturally over three books and I’m so glad of that; it never becomes the central story even though it’s important.

Thalli herself is a young woman faced with the overwhelming need to stop Loudin because she really may be the only one who can. Imagine having the fate of humanity literally resting on your shoulders! Unfortunately, Thalli is also wrestling with doubts about her faith as so many believers do when faced with horrendous crises and those doubts will certainly affect the outcome of this epic battle.

There’s heartbreak in this story as well as hope and I found myself completely satisfied while still wishing there could be more. It’s always hard to come to the end of a much-loved series so I’ll just say, “Well done, Krista McGee, and thank you!” 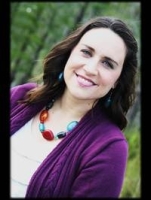 Krista writes for teens, teaches teens, and more often than not, acts like a teen. She and her family have lived and ministered in Texas, Costa Rica, and Spain. Her current hometown is Tampa, FL.

Enter the Rafflecopter drawing here to win a print
set of The Anomaly Trilogy by Krista McGee!

One thought on “Book Review: Revolutionary by Krista McGee—and a Giveaway”