Lauren Carr is the best-selling author of the Mac Faraday Mysteries, which takes place in Deep Creek Lake, Maryland. Each installment of Lauren’s hit mystery series, starting with It’s Murder, My Son which was released in June 2010, has made the best-seller’s list on Amazon. Twelve to Murder, the seventh Mac Faraday mystery, was released in February. The eighth installment, A Wedding and A Killing, will be released in September.

If you asked me when I developed my first character, I would have to honestly say I was three or four years old. Oh, Sam was a handsomely devilish little boy. He did all of the things that I, being a sweet little girl who never had the courage to do—which is an ongoing theme for all of my characters.

Of course, my friendship with Sam often resulted in my getting into trouble anyway. For some reason, my parents never believed me when I said Sam was the one who wrote all over the walls with crayons.

Sam moved away when I entered the first grade and made real live friends who didn’t seem so determined to get me into trouble. (I guess Sam wasn’t a real friend after all.)

As soon as I was old enough to sit down with a pen and paper, I created more imaginary friends and started putting them in books. I called these friends “characters.” Some of them have resulted from twists on real people I have encountered or even got to know, often Frankenstein-ed with traits from other people.

Some whole full-fledged characters will spring out of my imagination—like Sam did.

Creating imaginary friends (now I rationalize this insane habit by calling it “character development”) has become my favorite part of putting a mystery together. Luckily, most readers, seeing the fun of plopping a mixed group of quirky characters into the midst of a murder, seem to think I do it well.

Just as I thought I had a good handle on this literary chore—Homicide Detective Cameron Gates blasted into my life.

The female half of the Lovers in Crime Mysteries is without a doubt the most difficult and complicated character I have created—which makes her one of my favorite.

The Lovers in Crime Mysteries grew out of my first mystery series, the Joshua Thornton Mysteries. At the request of several readers, I decided to bring back Joshua Thornton in Shades of Murder, the third installment in the Mac Faraday Mysteries.

That is when my two detectives (Mac Faraday and Joshua Thornton), from two different series, meet.

While resurrecting my first detective Joshua Thornton, several years since my last mystery which featured him in A Reunion to Die For, I realized that now was the perfect time that this widower with five now grown children have a little romance in his life—preferably a homicide detective to share in his love of mystery.

I love strong female characters. Archie Monday, Mac Faraday’s lady love in my mysteries set on Deep Creek Lake is one example. Readers love her feminine beauty, sassiness, and her refusal to back down from a challenge. In Blast from the Past, she goes toe to toe with a mob boss and almost makes him pee his pants.

Yes, Archie Monday was a successful female character. It would have been very easy as a writer to duplicate Archie for the Lovers in Crime—change her name, hair color, and give her a badge.

Successful artists have done this. Have you ever heard a great hit song, or seen a great movie, or read a wonderful book that had become a big hit, only to see it/hear/read it again … and again … and again—only with a different setting, character names, or rewording of the lyrics.

The real-life Gnarly on his throne.

It is very easy for a writer to be afraid of messing with success. This recipe’s a hit, so let’s just use it again. This is referred to as writing from formula.

More than pride, my love for a challenge refused to let me do that. I wanted to find the perfect woman for Joshua Thornton. Someone who I knew he would want to spend the rest of his life solving murders with.

Joshua Thornton would not fall in love with just anyone.

Authors often play matchmaker for their characters. Just like in life, we can’t pair up just anybody and make it work, I knew going into Shades of Murder that Joshua Thornton was not the type of man to fall for some young cute brainless twit. He had raised five children on his own. Joshua was a practical man, who needed a woman of substance.

First, I made Cameron a girly girl—a beautiful woman in colorful dresses and high heels who stood out among the bloody crime scenes.

Then, I tried to envision her chasing a bad guy in that skirt and those high heels. Nope. Delete that!

Not only that, but it wasn’t quite realistic. As I learned at the Writer’s Police Academy, female detectives not only wear lace up shoes, but they don’t let their boobs hang out. It tends to get distracting.

So, Cameron’s wardrobe became pants with loops big enough to hold up her utility belt, lace up flat shoes, and high-cut shirts that cover up her boobs. In Real Murder, the latest Lovers in Crime Mystery, she wears with pride the black eye and bruises that she had acquired while apprehending a rapist and murderer.

As Cameron Gates came to life, she turned into a sassy homicide detective in her forties. Life has left her with some bruises, and has even knocked her down. Readers learn that her first husband, a state trooper, was killed four months after their wedding. She is a recovering alcoholic, who has a passion for ice cream and sweet desserts. How can you not love a woman who loves ice cream?

Yet, while Cameron is vulnerable, she refuses to be the victim. This is a tight-rope that authors find difficult to write. Make a character too strong, lacking in vulnerability, then readers have a hard time identifying or sympathizing with them. Make your character too vulnerable, and the reader loses respect for them due to their lack of strength.

Possibly, it is due to the bruises that life has handed her (losing her husband and the resulting spiral into alcoholism, from which she had fought her way back) that Cameron Gates is a fighter, strong enough to stand side by side with her lover and new husband, Joshua Thornton, when it comes to solving murders.

Once I got to know this spunky new character in the Lovers in Crime Mystery, I came to fall in love with her, as Joshua Thornton quickly did.

That’s what makes them the Lovers in Crime.

You’ll fall in love with Cameron Gates, Joshua Thornton, and their family in friends in the latest Lovers in Crime Mystery, Real Murder. 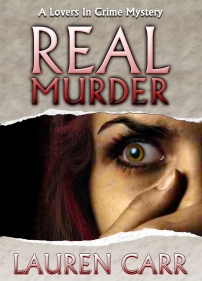 When Homicide Detective Cameron Gates befriends Dolly, the little old lady who lives across the street, she is warned not to get lured into helping the elderly woman by investigating the unsolved murder of one of her girls. “She’s senile,” Cameron is warned. “It’s not a real murder.”

Such is not the case. After Dolly is brutally murdered, Cameron discovers that the sweet blue-haired lady’s “girl” was a call girl, who had been killed in a mysterious double homicide.

Meanwhile, Prosecuting Attorney Joshua Thornton is looking for answers to the murder of a childhood friend, a sheriff deputy whose cruiser is found at the bottom of a lake. The deputy had disappeared almost twenty years ago while privately investigating the murder of a local prostitute.

It doesn’t take long for the Lovers in Crime to put their cases together to reveal a long-kept secret that some believe is worth killing to keep undercover.

Giveaway: Three ebook copies of Real Murder
by Lauren Carr!
To enter the drawing for the
giveaway, just leave a comment below.
The three winning names will be drawn
on Monday evening, July 14th, and the ebooks
will be sent out during the week of July 21st.