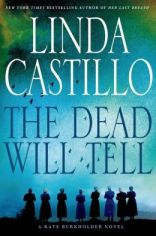 Everyone in Painters Mill knows the abandoned Hochstetler farm is haunted. But only a handful of the residents remember the terrible secrets lost in the muted/hushed whispers of time—and now death is stalking them, seemingly from the grave.

On a late-night shift, Chief of Police Kate Burkholder is called to the scene of an apparent suicide—an old man found hanging from the rafters in his dilapidated barn. But evidence quickly points to murder and Kate finds herself chasing a singularly difficult and elusive trail of evidence that somehow points back to the tragedy of that long ago incident. Meanwhile, Kate has moved in with state agent John Tomasetti and for the first time in so long, they’re both happy; a bliss quickly shattered when one of the men responsible for the murders of Tomasetti’s family four years ago is found not guilty, and walks away a free man. Will Tomasetti be pulled back to his own haunted past?

When a second man is found dead—also seemingly by his own hand—Kate discovers a link in the case that sends the investigation in a direction no one could imagine and revealing the horrifying truth of what really happened that terrible night thirty-five years ago, when an Amish father and his four children perished—and his young wife disappeared without a trace.

And, as Kate knows—the past never truly dies . . . in The Dead Will Tell by Linda Castillo

An unsolved horrific crime from years ago seems to be connected to a new series of deaths but why? And is it possible the only surviving victim of that long-ago home invasion could be behind the current crimes?

Painters Mill certainly isn’t the kind of town where you’d normally come across crimes as dark as these but Kate Burkholder is determined to bring peace back to the small yet diverse community. If that means stirring up old emotions, so be it; vengeance may be at the heart of everything that’s happening but 35 years is a very long time to wait, isn’t it? Kate’s investigation begins to reveal  more than she could ever have anticipated and, in the end, she’ll be confronted with a murderer who’s as cold-blooded and twisted as she’s ever met.

Kate is a cop I’ve grown to admire more and more mostly because of her intelligence and her compassion but also because her Amish background colors her personality and her ability to do her job. Being police chief is never an easy position to be in but Kate takes it in stride and has truly earned the respect and devotion of her team. The job isn’t everything, though, and her relationship with John Tomasetti keeps her going in those inevitable dark moments.

Tomasetti has his own issues in The Dead Will Tell when he learns that one of the men who allegedly killed his own family has escaped the justice he so richly deserved and watching him and Kate struggle with this was as elemental to the story as Kate’s current investigation. Ms. Castillo is great at coming up with a plot that keeps the reader on edge but it’s her character development that really shines throughout each book. These two have become old friends I want to spend time with and I’ll be looking forward to our next encounter.

Click here to listen to the first chapter of The Dead Will Tell.

Lana Granger lives a life of lies. She has told so many lies about where she comes from and who she is that the truth is like a cloudy nightmare she can’t quite recall. About to graduate from college and with her trust fund almost tapped out, she takes a job babysitting a troubled boy named Luke. Expelled from schools all over the country, the manipulative young Luke is accustomed to controlling the people in his life. But, in Lana, he may have met his match. Or has Lana met hers?

When Lana’s closest friend, Beck, mysteriously disappears, Lana resumes her lying ways—to friends, to the police, to herself. The police have a lot of questions for Lana when the story about her where-abouts the night Beck disappeared doesn’t jibe with eyewitness accounts. Lana will do anything to hide the truth, but it might not be enough to keep her ominous secrets buried: someone else knows about Lana’s lies. And he’s dying to tell.

The trouble with lies is that they grow exponentially, seeming to take on a life of their own. Lana has lied so much and for so long that getting to the truth might be something like finding one’s way through a maze but the real question must be “Why?” Why does Lana lie and why does she continue to do so when finding her missing friend should make her want to be honest?

The manipulative Luke is one of the more disturbing children I’ve come across, probably because we don’t want to believe that our young can be evil. They can, of course—Ted Bundy and John Wayne Gacy were seemingly innocent boys at one time—and watching Luke in his determination to know Lana’s secrets is, for lack of a better word, creepy. The true creepiness, though, comes from the anonymous voice we hear alternating with Lana’s.

The unknown can be a truly frightening thing and Lisa Unger is a writer who turns simple thoughts and events into riveting psychological terror. In the Blood is one of her most intense studies of the human mind yet and, as a really good thriller writer will do, she kept me up at night, unable to sleep until that next page was turned…and the next and the next.

To enter the drawing for a hardcover copy of
The Dead Will Tell by Linda Castillo and a mass
market paperback of In the Blood by Lisa Unger,
leave a comment below. The winning name will
be drawn Tuesday evening, July 8th.
This drawing is open to residents of
the US and Canada.