Earlier this month, I was supposed to be a host
for the Uncovering Cobbogoth blog tour but, as
sometimes happens, real life got in the way and
I had to beg off due to illness. Here, then, is my
belated review with apologies to the author,
Hannah L. Clark, and the tour organizer,
Nereyda Gonzalez at YA Bound Book Tours. 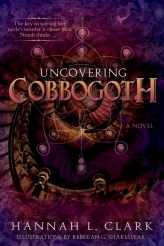 Norah Lukens needs to uncover the truth about the fabled lost city of Cobbogoth. After her archaeologist uncle’s murder, Norah is asked to translate his old research journal for evidence and discovers that his murder was a cover-up for something far more sinister.

When she turns to neighbor and only friend James Riley for help, she realizes that not only is their bitter-sweet past haunting her every step, but James is keeping dangerous secrets. Can Norah discover what they are before its too late to share her own.

After months away at boarding school, Norah is returning home to her uncle, the only family she has. This is not an easy homecoming though, because of the strain between her and her best friend, James, but even that awkwardness pales when Norah and James find the police at her home. Why would anyone want to kill an archaeologist? Could his government work have something to do with it? And why is the police detective so eager to have her translate a journal written in a secret code without having an official cryptographer look at it?

These are only a few of the questions that arise and it soon becomes very obvious that much more is at stake than just identifying a murderer. Uncle Jack has always been involved with proving the reality of myths and legends and, this time, he may have gone too far. Unfortunately, Norah and James find themselves at the center of a fable gone rather mad. Fantastical creatures that are both awe-inspiring and frightening, loss of memory, powers that Norah never dreamed she had, a crystal city in the caves of Iceland, secrets that have lasted for millenia, all converge to turn this girl’s life topsy-turvy  while she’s on the run from the law and from what may or may not be gods and demons…or perhaps they’re all just hallucinations.

Uncovering Cobbogoth is an intriguing blend of mystery and fantasy with a heavy dose of mythology and I thoroughly enjoyed it. Of particular appeal to me is that the focal point of these myths is Iceland, a country few authors choose as a setting, yet these are not your usual Norse legends. Ms. Clark’s real strength lies in her worldbuilding, down to the details of certain stones and the personalities of the characters both mortal and immortal, and I could envision everything that was happening in Norah’s quest to find the truth. She herself is almost larger than life and I connected with her and with James on several levels.

The pacing of the story is a little slow in the beginning but picks up before too long and, near the end, is close to breakneck. There’s a sort of cliffhanger that isn’t *quite* a cliffhanger as you might expect and the author could easily have a choice facing her; a sequel would fit very nicely but it would also be possible to have the tale end here. After rummaging around on Ms. Clark’s blog, I’m happy to say that she refers to the Cobbogoth series and mentions working on the second book, so I think we’ll be seeing more of Norah. This reader is very happy about that 😉 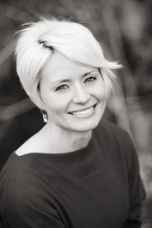 Hannah L. Clark is the author of the YA fantasy-adventure Uncovering Cobbogoth. It is the first book in a planned 7 book series. It was released by Cedar Fort Publishing on May 13, 2014.

Hannah lives in Pleasant Grove, UT with her husband and son.