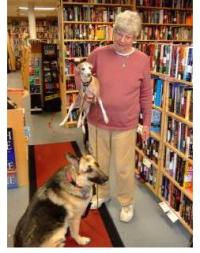 Kathleen Delaney, author of Murder Half-Baked and other books, retired from real estate to pursue writing full time. She’s here today with Part 3 of her recent adventures in a traveling wheelchair.

Murder by Syllabub, fifth in the Ellen McKenzie series, was released in 2013.

There are, in general, two ways to travel into areas where you have never been. You can take a tour or you can get guide books, maps, rent a car and start off.

Not getting lost has appeal. Bus drivers know where the one way streets are. They can read the road signs and know where to park. They’ve already read the maps and never miss a turn. Almost never. Your reservations are never lost and you rarely get a nasty surprise when you check into your room. The bus is comfortable and the tour guide points out interesting sights as you go and whisks you in and out of ancient castles and cathedrals with almost no hassle and quite a lot of information. He/she even gives you tidbits of history as you drive, such as the town you are rapidly passing is known worldwide for its sherry-dried dates-olive oil-hand painted tiles, but you’ll never see any of it unless it’s on your schedule. However, if you’re in your own car… you can go back.

There were three of us on this last trip to Spain and Portugal, my daughter, my son-in-law and me, and we rented a car. I’m sure we missed some castles, churches and other historic spots. We did occasionally get lost but what we found was delightful. There was the day we visited a castle on top of a huge mountain (there’s a lot of both in Spain and Portugal). I could only manage part of the castle but what I saw of it and the view from on top was worth it. So was what happened on the way back. We were hungry and decided to stop in a small town on our way down the mountain, but took a wrong turn. The town we found was not used to tourists, but it had a small restaurant and we decided to have lunch. I don’t remember what the dish was called because the only words I recognized were chicken and rice. It contained both, cooked in one of the best sauces I’ve had anywhere. The wine the waitress offered was white, chilled and wonderful and the people more than willing to try to understand us and to make us understand them. We had a great time and a great meal. Another day we “found” a small town where we shared a beer with the owners of a small café, expats from England, who told us all about the bull ring and local potters. Some of the pottery came home with us. We managed to wind through the streets of Granada to see the Spanish Riding School, which I loved, and had tapas on a sidewalk in the old town (actually it’s all old) which were terrible, but sitting, watching the people, feeling its atmosphere, so different from many other cities I’ve been in, was great.

We happened on another hillside café somewhere in Portugal, I never did know where, run by another English expat. We sat at her outside tables under huge oaks, eating shrimp salad and sipping wine while we watched a wedding party arrive at the local church greeted by the enthusiastic ringing of the bells.  The bride was, of course, beautiful and draped in white lace which looked very old, the groom was handsome and nervous, and the church appeared to be full to overflowing. Lovely.

We stayed several days on the Cote del Sol, and sampled different restaurants on the beach, eating local sea food for dinner as we watched the sun go down over Gibraltar. We stayed in a small bed and breakfast (more English expats) in Portugal on a street so narrow you could only get one car down it and had to park somewhere else entirely and walk back up. It’s all cobblestones, and stairs, so it presents a challenge but it was a delightful experience.

Don’t think we turned our noses up at tours, however. There are some things that are better or at least easier if you take one. We booked ourselves on one to The Alhambra Castle just outside the Granada and I’m glad we did. The place evidently is always packed and is easier to navigate with the help of a guide. And, my long suffering son-in-law got to spend the day looking, not driving.

So. Here is my list of suggestions for those of you who are thinking you’d like to travel but are worried because you’re “handicapped.”

!. Quite worrying and start browsing the internet. You’ll find all kinds of information there.

2. Most tours will tell you the level of activity involved. They will also tell you how much help you will get with luggage and things like flinging your wheel chair into the luggage compartment of the coach. If you have to get it out at every stop, you’re going to want a compassionate bus driver, or at least one who thinks such things are part of the job.

3. Make sure you know how much walking is involved and the conditions. The bus driver and the guide for the Alhambra trip turned an interesting shade of white when they saw me and my wheel chair roll up. I’d done some homework, however, and it worked out fine. The castle had special ramps and doors for wheel chairs so got to see some places no one else did. Couldn’t get into others, and when, after the tour, we went into the Algerian section of the city, I had to sit and wait.  Could get neither me nor the wheel chair over those steep streets or cobblestones. However, I was willing to. Town squares in small towns or ethnic areas are really quite interesting.

4. Take a book. If all else fails, you can read while you wait and I’ve met some pretty interesting people while waiting.

5. Almost everywhere I’ve been has accommodations for people with disabilities, and Europe is no exception. There is very little someone with limited mobility can’t do but PLAN AHEAD, especially if you are going to tour on your own. Ask the hotel or wherever you want to stay exactly what wheel chair accessible means. Have them describe it to you. How wide is the bathroom door? Can you get your chair in it? What is the shower like?  You know what you have to have to be able to function, so ask. Most restaurants have facilities, but for heaven’s sake, know how to ask directions to them in the language of the country you’re in. They don’t all have little paper dolls on the door, one in pants and the other in a dress.

6. Go. Don’t wait and don’t let your disability stop you. If you go alone a tour might work best, but if you have family who loves to travel, a car and a map might be the thing. Just be sure you have a willing and strong person to get you up those steep hills and can keep you from going down them a lot faster than you’d planned.

8 thoughts on “Touring Europe in a Wheel Chair, Part 3”