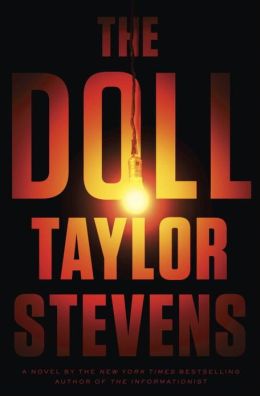 The Doll
Now in  Paperback!

Haunted by a life of violence and as proficient with languages as she is
with knives, Vanessa Michael Munroe, chameleon and hunter, has built
her life on a reputation for getting things done—dangerous and often
not-quite-legal things. Born to missionary parents in lawless Africa, taken
under the tutelage of gunrunners, and tortured by one of the jungle’s most
brutal men, Munroe was forced to do whatever it took to stay alive.

The ability to survive, fight, adapt, and blend has since taken her
across the globe on behalf of corporations, heads of state, and the
few private clients who can afford her unique brand of expertise,
and these abilities have made her enemies.

On a busy Dallas street, Munroe is kidnapped by an unseen opponent
and thrust into an underground world where women and girls are
merchandise and a shadowy figure known as The Doll Maker controls
her every move. While trusted friends race to unravel where she is and
why she was taken, everything pivots on one simple choice: Munroe must
use her unique set of skills to deliver a high-profile young woman into the
same nightmare that she once endured, or condemn to torture and
certain death the one person she loves above all else.

Driven by the violence that has made her what she is, cut off from help,
and with attempts to escape predicted and prevented, Munroe will hunt for
openings, for solutions, and a way to strike back at a man who holds all
the cards. Because only one thing is certain: she cannot save everyone.

In this high-octane thriller for fans of Lee Child, Stieg Larsson, and
Robert Ludlum’s Bourne trilogy, Vanessa Michael Munroe will have to
fight fast, smart and furiously to overcome a dangerous nemesis
and deliver her trademark brand of justice.

“Taylor Stevens, award-winning author of The Informationist and The Innocent,
returns in the spectacular novel The Doll. . . . Munroe is the perfect heroine
for the twenty-first century. With a mind like Jason Bourne, the skill set of
a modern day Sherlock Holmes, and the fighting ability of Jack Reacher,
The Doll is sure to be a hit with anyone who has ever devoured a thriller
in a night. The book explodes out of the gate and flies until the amazing ending.”
—Crimespree

“This New York Times bestselling author is back . . . with a truly spellbinding
story. . . . Readers have finally found a ‘Bond girl’ that is actually Bond,
himself. Vanessa is a heroine that will face the worst facets of humanity and
will fight to the finish to save a soul from following in her blood-soaked footsteps.”
—Suspense Magazine

“Stevens’ third Munroe book is another international
action-adventure with a Bourne-like avenging angel at the reins.”
—Booklist

TAYLOR STEVENS is the award-winning New York Times bestselling author of The Informationist, The Innocent and The Doll. Featuring Vanessa Michael Munroe, the series has received critical acclaim and the books are published in twenty languages. The Informationist has been optioned for film by James Cameron’s production company, Lightstorm Entertainment. Born in New York State, and into the Children of God, raised in communes across the globe and denied an education beyond sixth grade, Stevens was in her twenties when she broke free to follow hope and a vague idea of what possibilities lay beyond. She now lives in Texas, and is at work on the next Munroe novel.

To enter the drawing for a paperback copy of
The Doll by Taylor Stevens, leave a comment
below. The winning name will be drawn Saturday
evening, March 8th. This drawing is open to
residents of the US and Canada.