Kathleen Delaney, author of Murder Half-Baked and other books, retired from real estate to pursue writing full time. She’s here today with Part 2 of her recent adventures in a traveling wheelchair.

Murder by Syllabub, fifth in the Ellen McKenzie series, was released on July 1st.

Lisbon has a beautiful airport. At least, I think it’s beautiful. I didn’t see much of it. The wheelchair attendant must get paid by the chair because we careened through the airport. The man at customs was as languid as the wheelchair attendant was tense. Luckily, there wasn’t much of a line. The customs officer smiled at my attendant, glanced at my passport, stamped it and waved us through. Seconds later, we were at the baggage carrousel and my daughter and son-in-law were standing behind the glass doors, waving. My attendant asked if they were for me, at least I think that’s what he said, and was gone before I could answer.

I was in Portugal.

I would have loved to say Lisbon is lovely, but I wouldn’t find out that night. It was raining and we were staying in Cascais, a suburb of Lisbon. We left the airport heading the wrong direction on the freeway. But that’s what travel is all about, right? New adventure? Evidently, not on unknown freeways in the rain. After much grumbling about map reading and not calling out the turns soon enough, we finally found our way and arrived somewhat damp but in one piece at our time share.

The next morning I was a bit taken back to see the restaurant overflowing with people wearing magenta robes and thick leather sandals. I had heard, from my seat companion on the flight into Lisbon, that there was a Buddhist convention taking place, but hadn’t realized that I would be staying in the middle of it. Over 5000 Buddhists overflowed narrow streets. A huge white tent had been erected in the middle of town and classes and services were held from dawn to after dusk. If a fairly small town wants to host a large convention, Buddhists are a good choice. They don’t drink or roar their motorcycles at midnight. They don’t roar at all. They don’t play music at a decibel guaranteed to deafen or even talk in loud voices, and I don’t think they leave gum wrappers in their wake. Most of them were speaking English. From England English. Most were women. Women who were middle aged or just beyond, usually a bit on the plump side, and many of them wore the robes of Buddhist monks and had shaved their heads. That last part had me scratching mine.

That day my daughter and I took the commuter train to Belem. The track runs along the Mediterranean coast and was fascinating. We had ample time to enjoy it as we mistakenly had taken the express which doesn’t stop there. However, we eventually made it, and it was worth the effort. Belem has several claims to fame. The presidential palace is there and also an 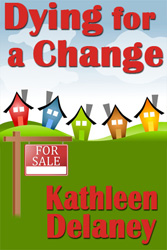 antique carriage museum. Not just any carriages, but Royal carriages, the kind Queen Elizabeth rides around in on special occasions. Some date back as far as the seventeenth century and many are so heavily encrusted with gold leaf I don’t see how they got horses big enough to pull them. I was not only amazed by the carriages, but how seemingly lax the security is. A few elderly guards wandered around. There were a couple of bored girls selling tickets and items in the gift shop, but that seemed all. Of course, those carriages are so big and heavy, someone would be bound to notice anyone who tried removing one and pawning one might prove a bit difficult.

Belem is also famous for its custard tarts. The line for them ran way down the sidewalk. My daughter went in and, knowing I’d never get my chair into that tiny shop with all those people, I stayed outside on the sidewalk where I had a great view of the Belem cathedral and monastery. It made me an easy target for the gypsy women selling shawls. I didn’t, at first, recognize the women as gypsies. They looked like many older women I’ve seen all over Europe, wearing shapeless dress, mostly black, with sensible shoes and plain shawls covering their shoulders and heads. I somehow had a mental picture of gypsies all traveling around in brightly painted wagons pulled by paint ponies, dressed like Flamenco dancers. I was wrong. They don’t. However, I liked them, and ended up with a large black scarf embroidered with bright red roses. I gave it to my granddaughter, who loves it. It was a great day and we ended it by actually taking the correct train back. That night we had a reservation at a local café to listen to Fado, the local folk music of Portugal. It is hauntingly beautiful, the guitar work, especially the 12 string guitar, wonderful, and the food was fabulous. A great evening made perfect because we took a cab back to the time share.

Another list of tips for those of you who are handicapped, and for you who aren’t.

1.    When buying train tickets, find out if there is an express train and DON”T get on it unless you verify it stops where you want to get off. Otherwise, you’ll spend a lot of time seeing the same stretch of track from two different directions.

2.    When boarding, prepare yourself to move fast. The doors don’t stay open very long. It’s no different than any city I’ve been to but the people are more helpful in Portugal and Spain then in New York. Have someone standing by to throw your wheelchair onto the train and heave you in behind it, if you can. If you can’t walk, I suggest putting out your cane to stop the doors from closing while you figure out how to get on board. If the door can’t close, help will arrive.

3.    Keep coins handy at all time as most bathrooms have coin-locks. Also, learn the word for “bathroom” and all the ways to identify it in the country you’re in. They don’t all have little signs on the door of women in dresses.

4.    Handicapped bathrooms in Portugal are required to be equipped with a panic cord.  There are lights above the outside door that flash red if the cord is pulled. It’s a great idea but where the cord is placed doesn’t seem to be regulated, so be careful what you pull. Flashing lights mean EMT people aren’t far behind. 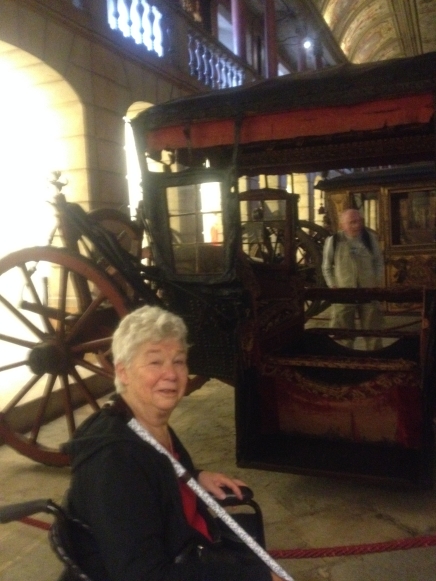 Kathleen in the carriage museum in Belem, Portugal