A madman with a mission is kidnapping groups of thrill-seeking high school seniors across the country, and it’s up to Christy to stop him.

To do so, she must take on a fearless alter ego and infiltrate a group of adrenaline junkies bent on pushing life to the limit. Death-defying stunts are only the beginning: two groups fit the profile, and Christy must discover the real target before it’s too late.

If she chooses the wrong group, more people will disappear. But choosing right puts her as the prime target—with no guarantee that she’ll get out alive.

Being a mystery fan from way back, I’m always excited when I find a really good one targeted for teens and what we now call “new adult”. Those age groups (which have very muddy lines between them) are inundated with speculative fiction—fantasy, science fiction, horror, etc,—but a really good mystery that will grab their attention is on the rare side. Such a mystery is the thriller, Adrenaline Rush.

The very nature of a thriller means that the action is not going to run smoothly and it surely doesn’t for Christy when she goes undercover looking for whoever is bent on kidnapping teens involved in extreme sports and other activities. Perhaps more to the point is WHY are they being taken? We’re about to find out when Christy sets herself up to be snatched.

Occasionally, the plot seems to be stretching credulity a little too much but isn’t that the case with pretty much every tale of spies and isn’t that implausibility half the fun?  A thriller needs to be scary, and this one has its moments, but it also needs to take the reader out of his or her comfort zone and Adrenaline Rush certainly does both in spades. Christy has an exciting life (what kid hasn’t at one time or another wanted to be a spy?) but she also has a lot of other things going on in her life, things that would cause anyone to be a little stressed. Probably the most important thing to keep in mind is that, while Christy might be a spy in training, she is also just 18 years old with all the attendant insecurities and immaturity. I also wasn’t as bothered as I usually am by the touch of insta-love since Christy has recently experienced a breakup.

I love Christy but there are other characters who “speak” to me almost as much, particularly Jeremy. Most of the players are fleshed out nicely and I had no trouble connecting with them.

Finally, while I found the prose a bit flowery every now and then (“His green eyes pounced on mine and his liquid voice smothered me in chocolate”—first time I ever knew eyes could pounce or that a voice could be chocolate), I did enjoy Ms. Hogan’s writing overall. Is Adrenaline Rush a little absurd and more than a little over the top? Yes. Will I read more? Well, I’d never met Christy or read anything by author Cindy M. Hogan before but I’m a convert now and will be adding the Watched Trilogy to my TBR pile first thing. 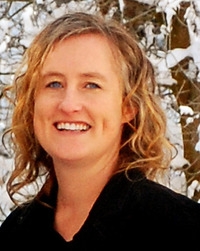 Cindy M. Hogan graduated with a secondary education teaching degree and enjoys spending time with unpredictable teenagers. More than anything she loves the time she has with her own teenage daughters and wishes she could freeze them at this fun age. If she’s not reading or writing, you’ll find her snuggled up with the love of her life watching a great movie or planning their next party. She loves to bake, garden and be outdoors doing a myriad of activities.