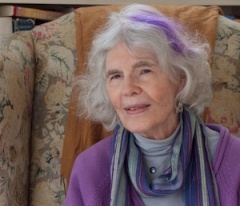 Nancy Means Wright has published 18 books of fiction, nonfiction, and poetry, including 6 adult mystery novels (St. Martin’s Press), a novella (Worldwide Library), a YA novel (E.P. Dutton), tween novel, Walking into the Wild, two historical novels from Perseverance Press: Midnight Fires, A Mystery with Mary Wollstonecraft in 2010, and its 2011 sequel, The Nightmare; and in 2013, a contemporary mystery, Broken Strings. She has written two mysteries for young people, The Pea Soup Poisonings won the ’06 Agatha Award for Best Children’s/YA Novel, and The Great Circus Train Robbery was an ’08 Agatha Award finalist. Her poems & short stories have appeared in numerous magazines, including American Literary Review, Seventeen, Ellery Queen Mystery Magazine, Level Best Books et al.; and in numerous anthologies. A longtime teacher, actress-director, Bread Loaf Scholar for a first novel, Wright lives with her spouse and two Maine Coon cats on a dirt road in the environs of Middlebury, Vermont.

I recently attended a reading of A Christmas Carol by Charles Dickens, and as always I couldn’t help but tear up as Tiny Tim made a stumbling appearance with his crutch—and led the way to old Scrooge’s redemption.  Tim probably had rickets, which a salary increase for his beleaguered dad, Bob Cratchit, would help to overcome.

Although Tiny Tim was modelled on the son of a disabled sister, Dickens had his own demons—perhaps epilepsy and asthma. As a writer, he wasn’t alone. Our own Agatha Christie was afflicted with dysgraphia, a disease which affected her spelling and work with numbers. Yet she persevered, like dyslexic Scott Fitzgerald, who was kicked out of school at age 12 for being unable to spell or focus on his work (dreaming of Gatsby, perhaps). And George Bernard Shaw whose disability made him “hate school,” went on to write his celebrated plays, including my favorite, “Saint Joan”, who heard voices—a mental illness?  Was Shaw hot and perspiring as he wrote of her fiery fate?

Gustave Flaubert insisted he was born with a “special language to which I alone have the key.” No wonder he rewrote each sentence of Madame Bovary seven times—and not just to find the perfect word!  Crime writer Bernard Taylor (The Perfect Murder) takes “dozens of rewrites to get it grammatically correct—but the creative juices keep me going.” My own dyslexic son-in-law, Jim Ellefson, might confuse God with dog in the drafts of poems, but he’s poet-in-residence at Champlain College, beloved by his students. And what of alcoholics, or drug addicts? I think of opium addict Samuel Coleridge, rushing his poem “Kubla Khan” onto paper before abject depression numbed his brain.

I mourn Flannery O’Connor, who was diagnosed in her twenties with lupus, a hereditary immune disease that tortured her while she was writing. The racking pain and fatigue made her feel that her body was attacking itself and killing her. Yet she called her illness “a blessing in disguise, for when one must stay at home there is nothing left to do but write.” Her stories often contain “little acts of violence” like the disease itself. Remember the clubfooted Rufus in “The Lame Shall Enter First,” who, to defy his counselor, rips out a page of the latter’s precious Bible and vigorously chews it? It’s usually a violence, O’Connor allows, “that is “strangely capable of returning my characters to reality and preparing them to accept their moment of grace.”

And then there is Martin Cruz Smith, author of blockbuster thrillers (Gorky Park), who has just made public his struggle with Parkinson’s Disease.  He hid it for years, keeping hands in his pockets to steady tremors, typing and retyping, exhausting mind and body. Now he sits on a stool, dictating to his wife who offers feedback and types his words into a computer. “It’s like playing football,” he told a Times reporter, “except you’ve got two quarterbacks.  It promises confusion, complication, and loss of immediate contact. You want to keep that ball moving, that idea within your grasp.” Since the deep brain stimulation he tried would have cognitive effects, the doctor implanted only the left brain, his most affected side. Now Smith is able to travel to Italy to research a new book, despite recurrent hallucinations.” Upbeat and persistent, he doesn’t always “find the first word I’m after. But I’ll take the second word, the third. I’ll take it because I like new ways of expressing things.”

How my heart goes out to Smith in his struggles to create!  For I lived vicariously with Parkinson’s through my sister Grace, a schoolteacher, who taught and wrote stories until she could no longer hold a pen. When she died I began writing Parkinson sufferers into my own work, including my latest, Broken Strings, in which Vermont farmwoman Glenna helps my puppeteer sleuth resolve a crime.  Glenna, who in real life defied her Parkinson’s, is based on a plain-speaking great-aunt who never let an injustice pass her by. I’ll celebrate her memory, and the creativity of all afflicted writers, young and old, this holiday, with Tiny Tim’s “God bless us, everyone!”