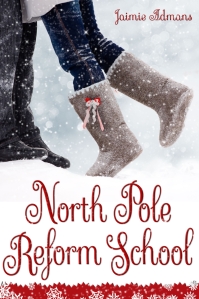 Mistletoe Bell hates Christmas. So would you if you had a name like hers. Her Christmas-mad parents make the festive season last all year, and with another Christmas looming, Mis doesn’t think she can take any more. After her carelessness causes an accident at school, it seems like things can’t get any worse.

Then she wakes up to find The Ghost of Christmases Ruined in her bedroom.

She is taken to the North Pole, to a reform school run by elves determined to make her love Christmas. Stuck in a misfit group of fellow Christmas-haters with a motley crew of the weird and even weirder, watched over by elves day and night, she doesn’t expect to meet cute and funny Luke, who is hiding a vulnerable side beneath his sarcastic exterior. She doesn’t expect to fall in love with him.

But all is not as it should be at the North Pole. A certain Mr Claus is making the elves’ lives a misery, and pretty soon Mistletoe and Luke are doing more than just learning to like Christmas.

A YA romantic comedy in which Santa is the bad guy, teaching reindeer to fly is on the curriculum, and zombies have a fondness for Christmas music.

Suitable for older teens and upwards due to bad language.

This time of year, I’m especially drawn to light, floofy reading material as an antidote to all the frenzy of shopping and holiday activities. I like it even better when it’s not a 500-pound paperweight since my reading during this season is sort of a few pages here, a few pages there. North Pole Reform School is exactly the sort of book I’d been looking for.

I love that parents would actually name their poor baby Mistletoe because of her birthdate. I’ve known a number of hapless victims of unfortunate name choices—most notably, a girl I knew in my teens named Candy Bunn but she was grateful they didn’t pick Honey—and Christmas names seem to be particular favorites among sentimental parents. Mistletoe, though, is just plain mean in a very funny way. The name alone made me want to love this poor girl and I did.

Mistletoe and Luke, along with a handful of other Christmas miscreants, get hauled off to remedial training at the North Pole because they’ve been judged for ruining Christmas in one way or another. Snarky elves are in charge and Tinsel, in particular, is the elven version of a drill sergeant. Mistletoe proves to be a bit of a challenge when she resists admitting she’s done anything to warrant her being in Santaland juvie; she thinks the teachers were at fault for not teaching the children to go near a fire and, besides, they’ll get plenty of sympathy presents. Luke, on the other hand, acknowledges that stealing yard decorations probably isn’t a nice thing to do but won’t accept responsibility for the consequences of his thefts.

In a way, North Pole Reform School is a morality tale mixed with rehab and it’s both fun and sobering, teaching a few lessons here and there. The surprising thing is that there’s more than a bit of a problem between the elves and Santa and Misty and Luke get a taste of it when they’re assigned to review some of the naughty list files. While they’re at it, they begin to find common ground between themselves and, in the end, Luke will come to a major turn in his life.

When all is said and done, this is not such a floofy book but I found it entertaining none the less. Ms. Admans has created a tale that, in truth, embodies some of the best of Christmas and I applaud her for making a point in such an appealing way. 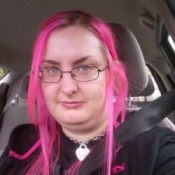 Jaimie is a 28-year-old English-sounding Welsh girl with an awkward-to-spell name. She lives in South Wales and enjoys writing, gardening, drinking tea and watching horror movies. She hates spiders and cheese & onion crisps. She has been writing for years but has never before plucked up the courage to tell people. Afterlife Academy is her third novel and she hopes you enjoy it. There are plenty more on the way!