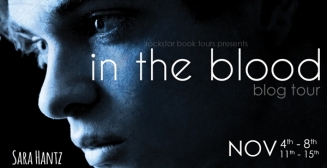 For seventeen years, Jed Franklin’s life was normal. Then his father was charged with the abuse and murder of four young boys and normal became a nightmare.

His mom’s practically a walking zombie, he’s lost most of his friends, and the press camps out on his lawn. The only things that keep him sane are his little sis; his best friend and dream girl, Summer; and the alcohol he stashes in his room. But after Jed wakes up from a total blackout to discover a local kid has gone missing—a kid he was last seen talking to—he’s forced to face his greatest fear: that he could somehow be responsible.

In a life that’s spiraled out of control, Jed must decide if he chooses his own destiny with Summer by his side or if the violent urges that plagued his father are truly in the blood…

The blight of child abuse, pedophilia in particular, is a very tough one to read about and I suspect it’s just as tough for an author to write about but it’s a very important topic. As a society, we must not sweep this under the rug and, if we don’t bring it into the light as often as we can, this terrible behavior will continue to damage and destroy children everywhere. I have a great deal of respect for Sara Hantz for being courageous enough to tackle a subject that will no doubt cost her some readers because of their desire to avoid books dealing with bad things happening to children.

Most of us have probably thought about the horrible treatment these abused children go through and the effects on the community in general but I think we probably shy away from how the pedophile’s own child responds when the truth about  his father becomes known, especially when that child was not a victim and, like everyone else, never considered the possibility of such a thing. How much worse must it be to know that this man you loved so much killed his prey and to wonder if you will someday become the same kind of monster?

Jed is the poster boy for the hatred and anger and guilt and, above all, fear that such a son must feel and his rollercoaster emotions are drawn with infinite care. Ms. Hantz has created one of the most emotionally engaging characters I’ve come across in a long time and I was completely invested in what he was experiencing. The terrible thoughts disrupting his life are not relieved in any way by his mother who has withdrawn into her own world and, in fact, I found myself resenting her almost as much as Jed’s father because she not only has withdrawn from Jed and his little sister, Amy, but has actually stopped caring in any demonstrable way. Yes, I understand that a wife would be devastated by learning what kind of man she married but to essentially abandon her children out of her own self-absorption is incomprehensible.

Jed’s love for five-year-old Amy  and his growing attachment to best friend Summer are all that’s keeping him together but the fear of becoming his father is nearly overwhelming…and then Dawson, a little neighborhood boy he’s fond of, disappears.

There is one shortcoming in this novel, in my opinion, and that is the relative abruptness of the ending, feeling sort of rushed. Despite that, In the Blood is emotionally draining and energizing at the same time and it will be on my list of best books read in 2013. I will not soon forget Jed Franklin.

Note: Readers should be aware that, although child abuse and murder are the crimes involved, there are no graphic descriptions of those crimes either during or after.

Sara Hantz comes from the UK and now lives in Australia (via 10 years in New Zealand). With a background in education, she lectured for many years before deciding to devote more time to her writing and working in the family business. She is also the author of Will the Real Abi Saunders Please Stand Up, and The Second Virginity of Suzy Green. Visit her online at sarahantz.com

Where you can find Sara:

Some nifty prizes are being offered by
the author. Check it out at Rafflecopter.