Three outrageous sisters, who never outgrew their Nancy Drew childhood, write the Cat DeLuca Mysteries. Some Like It Hot is third in the Cat Deluca mystery series, after Sticks & Stones, and Liar, Liar, one of Library Journal’s Best Mysteries of 2010. Julianne, Kari, and Kristen Larsen live in the Pacific Northwest and Chicago area where they’re writing Cat’s latest, great adventure. 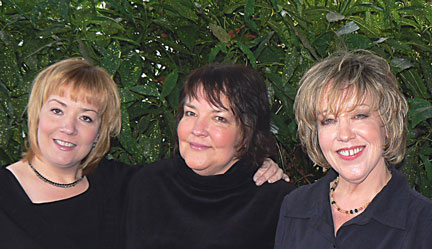 Welcome to my life.

Here I am staking out Chicago’s LeGrande Hotel, sucking the creamy filling out of my cannoli. I don’t expect this gig to take long.

The LeGrande Hotel rents rooms by the hour.  Though I doubt they change sheets that often.

My partner, a beagle named Inga, gnaws on a sausage in the backseat. My surveillance cooler pops with cold pizza and Mama’s fried chicken. I’m armed with binoculars and my trusty camera. My 9 mm is at home in a drawer, keeping all of Victoria’s Secrets safe.

Or at least ready to expose it on my 8X10 glossies.

My name is Cat DeLuca and I’m a private dick – though I prefer Jane. I don’t do investigations for lawyers and I won’t find your missing Uncle Harry. The Pants On Fire Detective Agency has a specialty. We catch cheaters. It’s a skill-set I learned from my run-around ex, Johnnie Rizzo. The man was a crash course in infidelity.

My client is a guy named Jerry. He’s a small, wiry guy with a birdlike face and a thick tussle of yellow hair that resembles a nest. He came to my office because his wife, Pixie, is staying out late. And when she comes home she smells like Brut Cologne.

That’s why I’m here. I shadowed Pixie to the LeGrande from her office. We made a few detours on the way. A quick spin by Lovers Package. Followed by a pit stop at Walgreen’s for a Snickers bar and some ForPlay Personal Lubricant Gel. Jerry’s luck may have run out a long time ago. But some Mama’s son was gonna get lucky tonight.

She pulls into the hotel parking lot where a hefty guy in a beat-up red Ford truck is waiting. Pixie’s husband may look like a bird.  But her lover is a big burly bear of a guy with dark curly hair exploding from his neckline. Pixie seems to be exploring a wide spectrum from the animal kingdom. 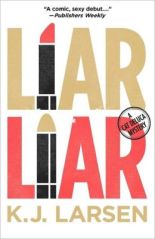 I’ve been in this business a long time.  I’ve learned people are driven to cheat for a variety of reasons.  For the thrill, by addiction, revenge, self-undoing, for the conquest, out of boredom or loss, and sometimes just for a lack of good sense.  Some people cheat because they think they won’t get caught. Others just wanna get busted.

Pixie’s lover hangs an arm around her shoulder and they enter the hotel. I grab my flower print handbag with the hidden camcorder and follow the heavy scent of Brut inside.

Pixie fills out the registration card while her lover pays for the room. When she’s finished, she shoves the card across the desk’s smooth surface.  The old man behind the desk looks at it.

He removes one of the keys from the hooks behind the desk and scoots a key across the desk.

The clerk palms the money, not bothering to ring it into the cash register.

I hang around the gumball machine in the lobby until they disappeared down the hallway.  When I approach the desk, the old man slides a registration card my way.

I resist asking for a five minute special. “Room 224 please.”

His eyes narrow.  “Is this about the Smiths? Cuz I don’t want no trouble.”

“Neither do I.” I slap a Franklin on the desk. He pockets it and I take my key.

If there had once been anything remotely grand about the LaGrande Hotel, you wouldn’t know it now. A groaning elevator takes me to the second floor and I tromp down a long, threadbare carpet that screams for a cleaning. My room is smack next to Pixie and her bear-like lover.

My key opens to a stale smelling room with a bed and nightstand, a rickety table, two chairs, and a boxy television from a previous century. A mirror hung on the wall over the headboard: a featured bonus for a sleezy hotel. The bedcover was a mosaic print designed to camouflage dirt and a host of bodily fluids. I think of seeing this room under a black light and shudder. Hugging my bag close, I steer clear of the furniture. Visions of bedbugs danced in my head. 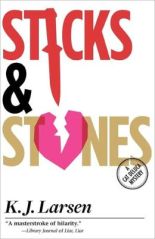 My plan of choice is to climb out the window and crawl along the ledge to the next window and capture that perfect Kodak moment. I swing the flower print purse-cam over my shoulder, unlock the window,  and heave. The window opens six inches and an obstruction prevents it from opening further.

I get it.  I’ve only been here three minutes and already I want to jump.

I’d been hoping to avoid Plan B.

The coast is clear when I step into the hallway. I switch on the video camera and slip my picks out of my wallet. Then I scoot to Room 222 and do my magic. I use my picks to turn the dead bolt and then the doorknob lock. I position my camera purse, twist the knob, and step inside.

Pixie was on top. Our eyes meet in the mirror.

I gasp, mortified. “The man downstairs gave me the wrong key.”

She spins around. “You’re following me! You were at Walgreens when I bought the aspirin.”

My gaze falls to the tube of ForPlay on the nightstand. I move the camouflaged camera bag a bit to pick it up.

“So how’s the aspirin working for you?”

He shoves Pixie aside and she almost hits the floor.

He chokes, “My wife knows?”

Pixie snaps. “She was following me, you idiot. She works for Jerry.”

He lunges and I run.

I haul ass, scooting past the elevator and flying down the stairs.  Hot on my heels, Grizzly guy shouts obscenities.

“Potty mouth,” I throw back at him.

The guy can run – I have to give him that. His body is a study in hair but he doesn’t look that scary. God knows he wasn’t hiding a weapon.

I hit the ground floor and dash across the lobby.

The old man moans behind the desk. “I don’t want no police,” 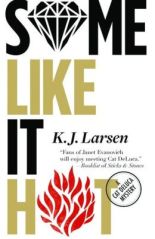 Bare feet slap the floor behind me.  I throw a look over my shoulder. Grizzly man is closing fast, a pillow recklessly covering his groin.  I hurl the gumball machine in passing.  I fling a coat rack to the floor.  Maybe obstruction techniques work for James Bond. But the glass globe doesn’t break and a gazillion spinning gumballs don’t pitch my pursuer on his face. He vaults over the coat rack, riding air and swallowing the distance between us.

My heart sinks. I’m not going to make it. I would lose precious seconds at the door and he’d rip the purse from my shoulder and crush it.

Dammit. I love that camera purse.

I feel his wheezing breath on my neck. “Gimme the camera.”

I hit the brakes and throw up my arms in a show of surrender. I face him, my heart pounding in my chest.

“You win. You can have the film but I get the camera back.”

He hacks a smoker’s cough. “You might want to think twice before sticking your nose where it don’t belong.”

I plunge a hand in my bag, drag out my pepper spray, and paint his face with it.

He screeches an ear-shattering pitch.

“And you sir, might want to lower that pillow.”

I hightail it to my car and don’t stop until I land behind the wheel.

Inga kisses my cheek. She has sausage breath.

I cranked the engine. “And that is exactly why I hate Plan B.”