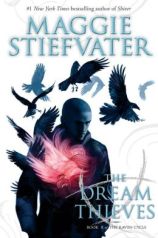 
Wow!  To say that Ms. Stiefvater has done it again, would be selling The Dream Thieves short.  Rather, the second book in The Raven Cycle surpasses even my hopes and expectations.  Having been a fan of Ms. Stiefvater for about four years now (since I read Ballad); I have been privy to her growth as a writer.  Each book has been a bit better than the last, and this is no exception.  Actually, her latest book even has something new, so I will start with that, and follow up with a couple more of my favourite things in this story.

A genuine psychopath. I’ve seen mean, hateful, and ornery and I have thoroughly enjoyed hating these folks, wishing them ill-will and smugly nodding when (if) they get their come-uppance.

This character is different.  There is no “reason” for his actions, he has nothing to gain.  There is not a vendetta, no score to settle.  He taunts and tortures Ronan for the sole purpose of his very own entertainment, and nothing more.  This character was so well written, so entirely despicable, that even writing about him in a review makes me a bit angry.

Enter Mr. Gray.  An apt pseudo name, based on his deliberate appearance; however, it quickly becomes evident that, on the inside, he is indeed a kaleidoscope.

This unique character adds another layer to the Raven Cycle.   His honesty is blatant, yet refreshing.  He doesn’t take people at face value.  Instead, he focuses deeply so that he may learn about new people quickly.  I love that he is a thinker; that he considers potential outcomes of his actions and how he feels out those actions, in order to determine what he will do.

Also, he often does his job while rockin’ to The Kinks.  Who, but Ms. Stiefvater could create a hit man that is so darn likable?

In The Raven Boys (Raven Cycle Book I), we are reminded that everyone has secrets.  In The Dream Thieves, some of the Lynch Family secrets are revealed.  In a final discussion between The Psychopath and Ronan, there is even a very sneaky allusion to a deep secret that Ronan may be keeping.  Very, very subtle and sneaky.  And a definite maybe.  Again, something only Ms. Stiefvater would slip into a story—just another reason that I treasure her writing.

Without a doubt, this is my favourite Stiefvater book so far, and although I feel like a lottery winner receiving the ARC, I’ll still be ordering my Doodled, Autographed copy from Fountain Bookstore.