An original eNovella in the acclaimed Nikki Glass urban fantasy series, taking place between the events of the novels Deadly Descendant and Rogue Descendant.

As a living descendant of Artemis the Huntress, private investigator Nikki Glass knows how to track someone down—but this time, her latest case leads to unexpected revelations of lies and betrayal…

I’m a big fan of crossgenre books, especially when the crossing is crime with dark fantasy. Supernatural detectives rock my boat, you might say, so I’m always interested to find a new (to me) series. Pros and Cons fits the bill very nicely, even though it’s not the beginning of the series; this novella is actually the third publication in the chronological list but is not labeled as #3 because it’s not a full-length novel. To my way of thinking, a mid-series novella or short story is a perfect way to introduce a new reader to that series and it certainly worked its magic on me.

I love the idea that Nikki Glass is a descendant of Artemis because, after all, what is a private investigator if not a huntress? I’m pretty sure I didn’t get a really good taste of Nikki’s story because there’s not much about her cohorts in this novella. That’s OK, though, because I needed to know that the crime element of this series is not just a throwaway side story to the paranormal theme. Nikki is a bona fide detective and I can learn more about her friends and colleagues, as well as her romantic life, when I delve further into the series.

In Pros and Cons, Nikki takes on a “normal” case to give her an excuse to stay away from her supernatural environs for a little while but, early on, she realizes that something is not quite right about her new client. All the mythological trappings were lingering off to the side and I fell in love/like with Jack when he got involved. Jack is a descendant of Loki, the Norse trickster god who’s fun and devious and more than a little bit of a bad boy. Jack was the icing on the cake of a decent little tale of crime and I’ll be glad to see these folks again when I go back to book #1, Dark Descendant. I have some catching up to do! 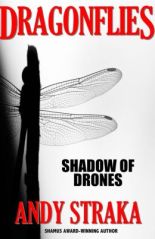 Out to seek justice for their comrades-in-arms, a former Army helicopter pilot and the soldier who saved her life find themselves drawn instead into a web of government intrigue and peering micro drones.

Raina Sanchez is plagued by nightmares. She can’t erase the memories of being shot down in Afghanistan, of losing her foot in the crash, and the death of her commanding officer. When asked by an ex-military contact to participate in a secret drone operation with ties to the war, she jumps at the chance to exorcise some of her demons.

She joins Tye Palmer, the decorated ex-infantryman who rescued her from the flaming wreckage of her Kiowa chopper. As civilian private investigators, together they embark on a sensitive, risky effort: using cutting-edge, micro air vehicle drones in an attempt to expose the son of media mogul Nathan Kurn as a campus rapist.

But as Raina and Tye come closer to the truth about Kurn and his powerful allies, Raina’s loyalties take a potential detour when she begins to understand a chilling reality. In a world where surveillance devices as small as tiny insects are being piloted into places most would never imagine, public and private forces both large and small are maneuvering to control them with inevitable consequences. For Raina and Tye the danger didn’t end when they finished their military careers—the threat has just begun.

Disclaimer: I have known Andy Straka for years and his previous books are among my favorites. That has not affected my review of this book.

As noted above, I know Andy and appreciate his writing but Dragonflies: Shadow of Drones is very different from his earlier work and must be considered in a different light. In all honesty, my feelings about it are quite mixed.

The premise of the story is quite engaging and I especially appreciated the way the author allows his protagonists to be confused about what’s really going on.  Too many thrillers, in my opinion, have characters who never seem to get ruffled and always have a finger on the pulse, so to speak. I’m quite sure black ops and intelligence communities, even high-powered corporations, have a better understanding of the situations they encounter than a layman would but it sometimes reaches the level of incredulity or, at the very least, a raised eyebrow. In Dragonflies, Raina and Tye are frequently caught in the middle of plots that don’t quite come together for them and I like that; it makes them very human and not so superhero-ish.

I was also intrigued by the whole idea of these extremely tiny spying devices and that experienced pilots would be needed to fly them. What a scary thing to contemplate! I don’t think I’m of enough interest to anyone to ever be a target but this certainly would be a formidable and potentially very damaging tool in the wrong hands. Having them be used in both private investigative work and by rival government factions in Dragonflies highlights how invasive they could become.

Raina and Tye are interesting characters but a bit too shallowly drawn to get to know them very well. Actually, we know more about Raina than Tye but I imagine we’ll get to know both of them much better as the series continues.

And that brings me to my last, and most adamant, opinion. I HATED the ending of this book.  I don’t mind cliffhangers but this one is beyond the pale and, if I had known it was written in serial style, I would not have read it until at least the second book, and maybe the third, was available. While I can get past any other faults in this book besides this one, I imagine other readers will be more accepting, especially those who like the TV cliffhangers that happen from week to week—and this has, in fact been optioned for TV. As for me, I probably won’t read any more installments until several are available.

Life for Kirsty d’Arc might not be perfect, but it’s far from hellish. She likes her job, has a great BFF, and truly admires Conrad, her boss. But when she dives in front of a lunatic’s blade to save him from certain death, she finds out Conrad isn’t so admirable after all. In fact, he’s traded her soul to the Devil!

While her body lies comatose on the Mortal Coil, Kirsty’s spirit is dragged straight to Hell…which is not quite the fire-and-brimstone abyss she’d expected. In fact, the place is quirky, wacky, and not without charm. Desperate to reunite body and soul before her time runs out, she seeks out allies, earning the friendship of a powerful drag demon, a psychic server, and, most importantly, Hell’s civil servant. But what of her growing attraction to Dante, the sexy Reaper with a flair for romantic language—can she forgive him for scything her soul?

Stuck in the netherworld, Kirsty vows she’ll do everything on her postmortem bucket list, starting with getting her life back and ensuring that Conrad has Hell to pay!

Oh, my, I can’t remember the last time I read a book that had me smiling, chuckling. sometimes outright guffawing on every single page but Gina X. Grant has accomplished that very feat with The Reluctant Reaper. This is just one of the funniest books ever and here’s the weird thing—a LOT of the humor involves puns and I have never been enamored with puns. Until now.

Kirsty D’Arc has just been accidentally reaped by a guy named Dante who carries a scythe and struck her with it instead of her boss who was supposed to die. Since it was an accident, though, Kirsty is not exactly dead, more like undead (but not of the vampirish sort). Kirsty has no choice—she has to go to Hell and appeal her “death”.

Hell, it turns out, is full of interesting surprises, including Charon who ferries the river in full drag and a small, very cute kittenish animal who is actually a real life gargoyle. Her name is Jenni, short for Jenni-fur because she sheds so much. Then there are the vicious little creatures called gee-gnomes who can alter your DNA. Most are sort of countrified-looking except one that seems to be more sophisticated,  known as a “metrognome”. Dante himself is a 700-year-old poet—yes, he’s THAT Dante.

Ms. Grant also has a great time skewering the very things we all love to hate, like this:

“Reaping is a precise art. It must occur only at the exact hour, preferably the exact minute, as ordained by Death. Or by our new software system, MS Death 2.0.”

“You have Microsoft products in Hell?”

Kirsty’s adventures in Hell keep her busy while she’s waiting for her trial but, when that finally comes, she’s in for a rude awakening. Will she be able to go back to her life or will she have to stay in the afterlife even if she isn’t really dead? Will she have to give up the hunky Dante? Will she really have to do something useful with her life?

I can’t help it, I loved this book and can’t wait to read the next one, Scythe Does Matter. Thank heavens—oops, Hell doesn’t appreciate that saying—it’s already on my Nook.

6 thoughts on “Book Review: Pros and Cons by Jenna Black, Dragonflies: Shadow of Drones by Andy Straka, and The Reluctant Reaper by Gina X. Grant”