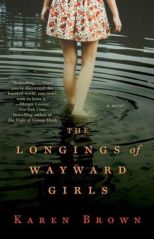 It’s an idyllic New England summer, and Sadie is a precocious only child on the edge of adolescence. It seems like July and August will pass lazily by, just as they have every year before. But one day, Sadie and her best friend play a seemingly harmless prank on a neighborhood girl. Soon after, that same little girl disappears from a backyard barbecue—and she is never seen again. Twenty years pass, and Sadie is still living in the same quiet suburb. She’s married to a good man, has two beautiful children, and seems to have put her past behind her. But when a boy from her old neighborhood returns to town, the nightmares of that summer will begin to resurface, and its unsolved mysteries will finally become clear.

Most of the big review publications love this book, using such terms as nervewracking, haunting, absorbing, tension, suspense. I’m sorry to say none of these words come to mind when I think about The Longings of Wayward Girls. It’s not that it’s a bad book—it really isn’t—but to say it’s full of suspense and tension is miles apart from what most mystery readers are looking for.

We know from the jacket copy that two children have gone missing but getting to any real information about those disappearances is a chore. The second instance, which is the real focus, doesn’t actually happen until more than two thirds through the story and that is simply far too long for the mystery reader to wait. In essence, the only real tension is caused by wondering when on earth we’ll be told anything about this second disappearance beyond the fact that it happened. To make matters worse, there’s no real resolution to that second crime because we’re left wondering whether it really was a crime or rather jealousy gone out of control leading to unintended consequences.

On the other hand, as a look at a woman’s life and how her adulthood is so heavily influenced by her childhood, this hits the mark. Speaking personally, I couldn’t like Sadie very much—she’s remarkably self-centered as a child and as an adult—but she has some reason to be that way. If I had thought this would be a personality study that happens to include a couple of mysteries, I might have enjoyed it very much because Ms. Brown is a fine writer, particularly when it comes to evoking a sense of setting. Unfortunately, the description makes it sound much more like suspense is the overriding theme and that just isn’t the case.  The publisher should come up with a more accurate description for future editions to prevent disappointing readers looking for a solid crime drama.

The sixth installment of the critically acclaimed, New York Times bestselling, Edgar- and Macavity-nominated and Alex Award-winning series by Lisa Lutz, finds our intrepid heroine of the series, Isabel Spellman, PI, at a crossroads. Izzy is used to being followed, extorted, and questioned—all occupational hazards of working at her family’s firm, Spellman Investigations. Her little sister, Rae, once tailed Izzy for weeks on end to discover the identity of Izzy’s boyfriend. Her mother, Olivia, once blackmailed Izzy with photo­graphic evidence of Prom Night 1994. It seemed that Spellman vigilance would dis­sipate after Izzy was fired for breaching client confidentiality, but then Izzy avenged her dismissal by staging a hostile takeover of the company. She should have known better than to think she could put such she­nanigans behind her.

In The Last Word, Izzy’s troubles are just beginning. After her takeover of Spellman Investigations, her employees are the fur­thest thing from collegial…and Izzy finds herself struggling to pay the bills. But when she is accused of embezzling from a former client, the ridiculously wealthy Mr. Slayter, the stakes become immense. If Izzy gets indicted, she could lose her PI license and the Spellman family’s livelihood, not to mention her own freedom. Is this the end of Izzy Spellman, PI?

A few years ago, word spread that Lisa Lutz was retiring her Spellman clan after the fourth book and I was one of many who were horrified to hear that news. Then, lo and behold, a fifth book showed up and, now, number 6 in the series. I don’t know what changed the author’s mind but I couldn’t be happier.

Izzy Spellman is a character I’ve come to love and I wish I could spend real-life time with her. Alas, that is not to be, so I have to get my fill of her company through her books and this latest is no disappointment.  Her squirrelly family is just as much fun as they’ve always been—who else would carry on inter-family warfare with boxer shorts and fluffy slippers?—and, although the cases being investigated are not exactly earthshaking, going along for the ride is an adventure in itself.

I especially appreciated baby sister Rae’s development of a new way to bring in much-needed income and and Izzy certainly needs to find out who’s taking advantage of a tycoon’s weakness but there really are two primary mysteries…will the family survive Izzy’s hostile takeover of the investigation business and what will it take to get a three-year-old despot named Princess Banana to approve of Izzy?

Anyone who enjoys a good deal of humor in their mystery reading will love The Last Word and all the other Spellman books and I’m already eagerly awaiting #7.