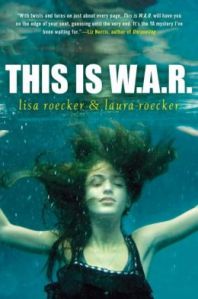 This is not a story of forgiveness…

The mystery of their best friend’s murder drives four girls to destroy the Gregory family. Emily Thorne would be proud.

Everyone at Hawthorne Lake Country Club saw Willa Ames-Rowan climb into a boat with James Gregory, the Club’s heir apparent.

And everyone at Hawthorne Lake Country Club watched him return. Alone.

They all know he killed her. But none of them will say a word. The Gregory family is very, very good at making problems go away.

Enter the W.A.R.—the war to avenge Willa Ames-Rowan. Four girls. Four very different motives for justice and revenge, and only one rule: destroy the Gregory family at any cost.

Apparently, I did not read the same book a lot of other people did. One review after another, professional and amateur, heaps praise on it while I can’t even muster up a “meh”. Why do I feel this way? Normally, I bend over backwards to avoid spoilers but, in this case, I need to reveal important points to explain what bothered me the most so, if you don’t want to know about those points, you should stop reading now.

First, there’s the implication that these four girls are friends. It’s true that three of them are but the fourth is in no way a friend of the other three for the simple reason that there’s a huge divide, socially and financially speaking. By the end of the story, the three have decided to accept the fourth but this new friendship is based entirely on their shared experiences in getting revenge. That is hardly a healthy basis for friendship and I don’t for a minute believe it would last.

Next, there is the issue that this book does not include one single adult with character, not one. At first, I thought this was an attempt to paint the wealthy as the bad guys but the authors actually spread it around so that employees of the club and the local cop have no more integrity and moral strength than the privileged. I get wanting to have the young adult protagonists appear to have character that is a step above their elders but this is no way to do it.

Speaking of the four girls, none of them are especially bright—they come up with some really stupid ideas, such as feeding hormones to their target so he’ll grow manboobs. Seriously?? Then, when they finally find a way to bring the Captain and Trip down, Madge, who spearheaded this revenge plot all along, gives it all up for money. Are you kidding? Are we supposed to understand this is a tale of how money makes up for all the guilt, anger, heartache and remorse?

The last thing I’ll mention is the inordinate power of the Captain and his grandsons which goes far beyond all credibility. Sure, the rich can be very powerful and control a lot of what goes on around the rest of us but it goes much too far here. The Captain would put it about that the older twin is actually the younger? For what reason? He’s already cut the older boy out of his will so why go to the trouble of lying about his age? And why would he do it after the boy is somehow responsible for the head-on collision that killed his parents? Are we supposed to believe everybody in town would conveniently accept the change in birth order? Also, what bank would let Trip into Madge’s safe deposit box? An attorney general would not prosecute Trip for murder unless the Captain allows it? Please. This is a small town that centers around the Captain’s company but he’s not the King of America.

I’m very fond of Soho Teen books but this one is a misfire and, in my opinion, is a one-sided slap against people in general, not just the rich. How sad that the authors have such a low opinion of humanity.

One thought on “Book Review: This Is W.A.R. by Lisa Roecker & Laura Roecker”