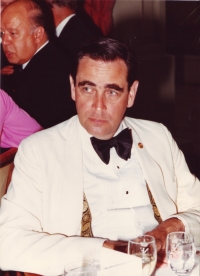 Now residents of Maryland’s Eastern Shore, the Shepards enjoy visits from their daughters and granddaughters, fine and moderate weather, ocean swims at Assateague, Chesapeake Bay crabs, and the company of Rajah and Rani, their two rescued cats.

Prize winning mystery writer William S. Shepard is the creator of a new genre, the diplomatic mystery, whose plots are set in American Embassies overseas. That mirrors Shepard’s own career in the Foreign Service of the United States, during which he served in Singapore, Saigon, Budapest, Athens and Bordeaux, in addition to five Washington tours of duty.

His diplomatic mystery books explore this rich, insider background into the world of high stakes diplomacy and government. His main character is a young career diplomat, Robbie Cutler. The first four books in the series are available as Ebooks. Shepard evokes his last Foreign Service post, Consul General in Bordeaux, in Vintage Murder, the first of the series of four “diplomatic mysteries.” The second, Murder On The Danube, mines his knowledge of Hungary and the 1956 Revolution. In Murder In Dordogne Robbie Cutler and his bride Sylvie are just married, but their honeymoon in the scenic southwest of France is interrupted by murders.

The most recent of the series, The Saladin Affair, has been released as an Ebook. Robbie Cutler has been transferred to work for the Secretary of State. Like the author once did, Cutler arranges trips on Air Force Two – now enlivened by serial Al Qaeda attempts to assassinate the Secretary of State, as they travel to Dublin, London, Paris, Vienna, Riga and Moscow!

My series of diplomatic mysteries is based on my career in the Foreign Service. Writing about experiences at five embassies overseas was a natural pleasure, and my memoir, Sunsets In Singapore: A Foreign Service Memoir takes the reader into those true experiences, ranging from Budapest when that grand Eastern European capital was behind the Iron Curtain, to Singapore itself, where we saw the island become an independent nation, and made friends that we keep to this day.

Readers have said that this memoir is the perfect preparation for the dreaded Foreign Service Examination, for I set forth a number of incidents, and show how how they were actually handled. And along the way we meet a number of fascinating persons, from Jozsef Cardinal Mindszenty in Budapest, to General Omar Bradley in Saigon, and Bill Bailey – yes, the original Bill Bailey – in Singapore.

But it became clear to me that many of the things I wanted to say about the diplomatic career were best said as fiction. Therefore Embassy Tales, a collection of nineteen stories about life in an embassy, was written. It takes the reader from the General Services

Offices, which keeps the books and makes sure the lawns are clipped, to the Ambassador’s office.

Along the way, there are a number of crimes, ranging from felony theft to murder. The story “Little Brown Jug” was awarded a mystery national short story prize by Mary Higgins Clark. And for those who have followed the career of Robbie Cutler in the diplomatic mystery series, “Who Stole The Treaty of Paris Desk?” will be a treat – Cutler’s first appearance, as he solves the mystery of the theft of a national treasure, the desk on which American Independence was signed.

These are already bestselling Foreign Service books. To make the bargain even better, I’ve combined Sunsets In Singapore and Embassy Tales into one Ebook, Diplomatic Tales, at a savings (just $4.95, instead of $2.99 per book).

In the latest diplomatic mystery, The Saladin Affair, my protagonist, Robbie Cutler has survived the terrorist ETA, the

Russian Mafia, and a particularly unsavory former Nazi collaborator. Now he has been reassigned to the office of the Secretary of State, where he is responsible for helping to plan trips overseas (a job I once held for Secretaries Dean Rusk and William Rogers). The story contains a mystery within a mystery… what rare documents from the era of Shakespeare are hidden within an Elizabethan desk? They form a motive for murder that Robbie must solve – as though keeping the new Secretary of State safe during a trip to six European capitals was not enough to keep Cutler on his toes.

The Secretary travels to Dublin, London, Paris, Vienna, Moscow and Riga, as Al Qaeda tracks every move, and makes plans for several assassination attempts. The plot after the 9/11 Benghazi murders cuts perilously close to real diplomatic life, and the reader will enjoy every twist and turn as the final truths of The Saladin Affair are revealed by the Secretary of State during an address at the Royal Gallery at Parliament. 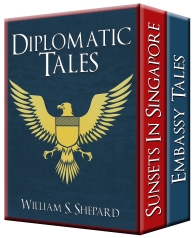