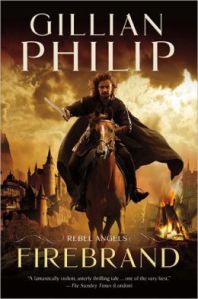 At the end of the sixteenth century, religious upheaval brings fear, superstition, and doubt to the lives of mortals. Yet unbeknownst to them, another world lies just beyond the Veil: the realm of the Sithe, a fierce and beautiful people for whom a full-mortal life is but the blink of an eye. The Veil protects and hides their world…but it is fraying at the edges, and not all think it should be repaired.

Discarded by his mother and ignored by his father, sixteen-year-old Seth MacGregor has grown up half wild in his father’s fortress, with only his idolized older brother, Conal, for family. When Conal quarrels with the Sithe queen and is forced into exile in the full-mortal world, Seth volunteers to go with him.

But life beyond the Veil is even more dangerous than they expected, and Seth and Conal soon find themselves embroiled in a witch-hunt—in which they are the quarry. Trapped between the queen’s machinations at home and the superstitious violence of the otherworld, Seth must act before both of them are fed to the witch-hunters’ fires…

There are times when I’m completely surprised and blown away by a book that bends and breaks all my expectations and, when that happens, I feel as though I’ve discovered something that will stick with me for a very long time. Such a book is Firebrand. I have to admit I’ve gotten a little tired of dark faerie themes but I haven’t quite given up yet and I’m so glad I didn’t miss the opportunity to enjoy this one.

I won’t say a lot about the story since many other reviewers have already done so but I do want to say that the 16th-century Scottish setting is a real enhancement, actually a character in itself. I like otherworldly settings but I think Ms. Philip’s choice of a place and time the reader can recognize is part of what makes this so special (and I’m probably influenced by the fact that I’ve visited Scotland and loved it).

Ms. Philip’s characterization is also top-notch and I particularly appreciated the introduction of the Sithe into the human world rather than the reverse which is the usual theme. As fierce as they are, the Sithe are still a peaceful folk and are not prepared for the harshness of the human environs when their own queen forces them into it. Brothers Seth and Conal find themselves exiled beyond the Veil and are driven to return and take back what belongs to them but they are not prepared for the violence brought on by the humans’ superstitions, especially when they realize they are the quarry of the witch-hunters. I loved Queen Kate, not because I approve of her but because she is so finely drawn and so deliciously power-hungry. Seth and Conal, on the other hand, represent the best of the Sithe world and also a future tainted by human influences, and a girl named Catriona will have a lasting effect.

Is Firebrand geared towards the young adult reader? Technically, I’d say no, but it’s certainly age-appropriate for older teens and I know they will enjoy this as much as adults will. Personally, I’m already yearning for the next book, Bloodstone.

for a print copy of Firebrand by Gillian Philip. The winning name

will be drawn on the evening of Friday, April 12th.

Open to residents of the US and Canada.