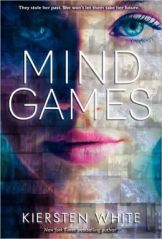 Fia was born with flawless instincts. Her first impulse, her gut feeling, is always exactly right. Her sister, Annie, is blind to the world around her-except when her mind is gripped by strange visions of the future.

Trapped in a school that uses girls with extraordinary powers as tools for corporate espionage, Annie and Fia are forced to choose over and over between using their abilities in twisted, unthinkable ways…or risking each other’s lives by refusing to obey.

Looking for a kickbutt teen heroine? Look no further, Fia is here. Fia can literally beat just about anybody in hand-to-hand combat and she also has the ability to make snap decisions that are never wrong. Fia is also extremely damaged because of the things that she’s required to do by the man who controls her life. He can do that simply by letting Fia know her sister Annie is completely at his mercy.

Annie, two years older than Fia, is blind and Fia has always taken responsibility for her, especially since they were orphaned. Annie is also a Seer and when she has visions, she actually does see. Despite her blindness, she will do anything for her sister.

Except…except when she wants something that will be to her own benefit. Annie really is not such a likeable person. Fia certainly has her flaws, major ones, but she has character and she wants badly to not do the things Keane demands of her. Annie seems to be just as caring as Fia but, in fact, she’s far more self-absorbed.

Mind Games is told by the alternating POVs of Fia and Annie and also shifts time from today to years ago and between. That keeps the reader engaged but could cause some to flounder a bit although I do recommend pushing on. The time shifts fill in the backstory that is so necessary to one’s understanding of these girls and their circumstances but also raises more questions. When Fia finally tries to step outside the rules, will she succeed or will Keane take control again?

There are flaws in this story: the weak character development of Annie and Adam while more attention is paid to Fia and James, there is simply not enough explanation of Keane’s intentions and the source of his power, there seem to be no real consequences to any of the bad things that happen, Adam doesn’t seem anywhere near smart enough to be a doctor at 19 (that’s just not credible at all considering how long it takes to become a doctor), the callousness of the girls’ aunt is unexplained. On the whole, though, I enjoyed Mind Games very much, especially after what can only be described as a stunning ending. Kiersten White is an author worth reading and I’m hopeful that many of the questions will be answered in the next book, coming next winter. 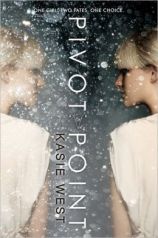 Addison Coleman’s life is one big “What if?” As a Searcher, a special type of clairvoyant, whenever Addie is faced with a choice, she can look into the future and see both outcomes. When Addie’s parents tell her they are getting a divorce and she has to pick who she wants to live with-her father, who is leaving the paranormal compound to live among the “Norms,” or her mother, who is staying in the life Addie has always known-the answer should be easy. One six-week Search proves it’s not. With love and loss in both lives, it all comes down to which reality she’s willing to live through…and who she can’t live without.

I always read blurbs, descriptions, synopses, anything that might be available to help me decide if I want to read a book before I ask for an ARC. Then, when the time comes for me to read it, I refresh my memory before starting so I have some idea of the story. This time, on a whim, I did not do that and, since I’d had the ARC since mid-November, I remembered precisely nothing about it other than it was YA and I’d requested it so it must have appealed to me for some reason.

And what a roller coaster of a story this is. I’m glad I went into it cold because one of the author’s strengths is in letting the reader experience what the character is experiencing and that meant I didn’t know any more than she did what was going on. From one chapter to the next, Addie (and I) lived one future or another—sometimes not being sure which future it was—and it became more and more apparent that her ability to see the consequences of her actions does not mean that it’s easy to choose the right path. When Addie finds herself loving two boys, one in each future, and sees her deepest friendship in jeopardy, which future will she decide is appropriate—and what will that decision cost her and those she cares about?

The author has done something that I find quite interesting. With all its seemingly futuristic trappings, this tale is actually contemporary and set in familiar surroundings. There’s nothing particularly different about these people except that they have learned to enhance their mental abilities but they’re not being used for nefarious purposes and there are no tyrannical leaders involved. This could be you or me.

I really love this book—a lot—and it was a quick, intriguing read. Addie is a girl I want to spend more time with and Kasie West is an author who knows how to craft an engaging story, one that makes you wonder “what if?”. I’m looking forward very much to the sequel to Pivot Point next winter.