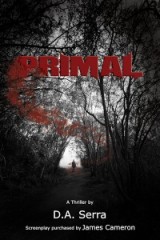 With everything at stake – what are you capable of?  What if the worst happens and you’re not a policeman, a soldier, or a spy with weapons training and an iron heart?  What if you’re a schoolteacher – a mom?  In this gritty crime thriller a family vacation takes a vicious turn when a fishing camp is invaded by four armed men.  With nothing except her brains, her will, and the element of surprise on her side, Alison must learn to kill or watch her family die.

By its very definition, a thriller should be just that, a book that gives the reader a thrill while he or she is vicariously living through the protagonist’s crisis, a book that makes the reader feel the intensity of the moment and experience at least a little bit of fear. In that regard, Primal does not disappoint, and the visceral collison of two families with very different moral essences is indeed intense, but there are a few things I didn’t care for.

First, I detest the use of present tense, especially in crime fiction, and the author is apparently not entirely comfortable with it either as there are a number of instances when she slips into past tense for a sentence or two. I really don’t understand why any crime fiction writer thinks using present tense is a good idea but I’m at least very grateful that the author didn’t also use first person.

Also, during the first half or so of the book, the entire part dealing with the events on the island, I felt as though I was reading the activities of a director in the midst of making a movie, complete with the occasional exclamation point to notify the actors that this is a moment of FEAR or EXCITEMENT. I suppose I should have expected this since the author is a former screenwriter and, in fact, this story first saw the light of day as a screenplay.

Another thing that added to the feeling of reading a movie script was the rapidly changing scenes and the sheer coincidences that took place, not to mention the uncanny luck of the protagonist. Add to those the shallow depictions of the hostages other than the family and you’ve got a movie in the making. Oh, and we mustn’t forget the guy who manages to move a quarter mile in a matter of minutes despite a horrendous impediment.

Then comes the second part of the book and this is where I felt Ms. Serra really showed her strength as a writer. Watching Alison’s descent into near-madness and being very unsure whether it really is madness or if she is right to be so afraid and on edge is a tale all in itself. All the media attention is certainly to be expected, as is the  abrupt cessation of that attention when another story grabs the spotlight. It’s also understandable that the police believe she is over-compensating for what she has gone through.

The heart of all this is the painful deterioration of not only Alison’s very existence but also the lives of those who care about her, whether they be her husband and child or other family or friends and co-workers. This part of the story is what forces the reader to keep on till the end because we simply must know—is it real or all imagined? I was confident that I knew the answer to that question early on but how it would be resolved was a different matter entirely and I’m glad I hung around to find out. When all is said and done, though, I think this would make a better movie than a book. 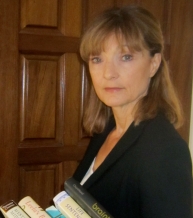 Deborah Serra was a screenwriter for twenty years and recognized by the Writer’s Guild for her long term continuous employment. She has written ten TV movies, four feature films, and numerous TV episodes including two years as a staff writer for NBC.  She worked for top producers, directors, and actors.  She has taught writing at the University of California, San Diego, Wofford College and at writers’ conferences nationwide.  Serra has now turned her attention to novels, and she was honored as a recent recipient of the prestigious Hawthornden Literary Fellowship, and as a semi-finalist for the William Faulkner-William Wisdom Creative Writing Award given by the Faulkner Society in New Orleans, LA.