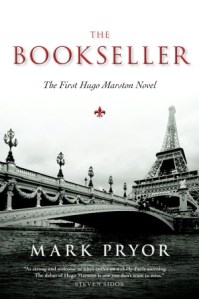 Who is killing the celebrated bouquinistes of Paris?

Max—an elderly Paris bookstall owner—is abducted at gunpoint. His friend, Hugo Marston, head of security at the US embassy, looks on helplessly, powerless to do anything to stop the kidnapper.

Marston launches a search, enlisting the help of semiretired CIA agent Tom Green. Their investigation reveals that Max was a Holocaust survivor and later became a Nazi hunter. Is his disappearance somehow tied to his grim history, or even to the mysterious old books he sold?

On the streets of Paris, tensions are rising as rival drug gangs engage in violent turf wars. Before long, other booksellers start to disappear, their bodies found floating in the Seine. Though the police are not interested in his opinion, Marston is convinced the hostilities have something to do with the murders of these bouquinistes.

Then he himself becomes a target of the unknown assassins.

With Tom by his side, Marston finally puts the pieces of the puzzle together, connecting the past with the present and leading the two men, quite literally, to the enemy’s lair.

Just as the killer intended.

When I was first offered the chance to read and review this book, I naturally had to say yes. I mean, after all, it’s booksellers and I used to be one so how could I possibly resist? It didn’t hurt that the description was so enticing. Paris, kidnapping, murder, booksellers, spy-ish stuff—what more could I want? And now I’m happy to report that debut author Mark Pryor and  The Bookseller have lived up to my hopes quite nicely.

Hugo Marston has joined my list of heroes I love to read about, joining the likes of Lee Child’s Jack Reacher and Patrick Lee’s Travis Chase. These are the guys who have all the brawn they need but they use their minds to win the day and that is so very appealing to me. Hugo also has a pretty nifty buddy in Tom Green. The two look into the puzzle of the missing and murdered booksellers with open minds and great aplomb and the pace is almost faster than you can keep up with. Possible perpetrators and motives are in abundance and, at the same time, the author gives us a feel for Paris that is so rich and full of history that, at times, I forgot the story takes place in contemporary times or, at least, within the last 75 years. Or so. You’ll just have to find out for yourself 😉

Wonderful characters abound besides Hugo and Tom—in the very first pages, I came to like Max immeasurably—and the plot keeps on a-comin’.  Throw in an intriguing journalist, the Parisian police, Nazi hunters, drug dealers  and the hindrances that come with being attached to a US embassy and there’s hardly anything more you need (and Hugo’s Texas background adds a flavor that mixes nicely with Paris). Oh, and I mustn’t forget the feeling that the author gives that the reader is sitting right there in Paris soaking up all its beauty and history while all this is going on around you. What a lovely way to read a book!

To me, three things are most evident when an author is really good. First is strong characters, second is a plot that grabs me and won’t let go, and third is a mastery of the English language. Mark Pryor has it all in his first novel and I can’t wait for his next Hugo Marston mystery.

Have you discovered a real winner lately, something that’s

new to you if not to the book world? Tell us about it and

of The Bookseller by Mark Pryor. Open to all readers in

search of good mysteries, no residence restrictions. The winning

8 thoughts on “Book Review: The Bookseller by Mark Pryor—and a Giveaway”