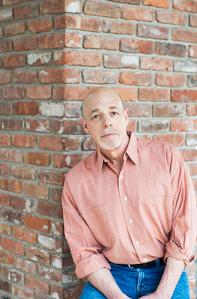 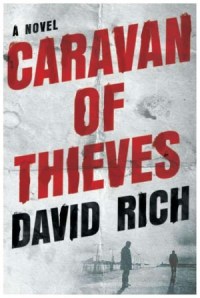 David Rich has sold screenplays to most of the major studios, and to production companies in the U.S. and Europe.  He wrote the feature film, “Renegades”, starring Kiefer Sutherland and Lou Diamond Philips, as well episodes of “MacGyver” and other shows.  He wrote three plays: “The Interview”, “The Rescue”, and “W.A.R. (Women’s Armed Resistance)”. Forsaking Los Angeles for small town Connecticut, David turned his attention to fiction.  Caravan of Thieves is the result.  Raised in Chicago, David received his B.A. from Tulane, spent one rainy, Withnail-esque year in Wales, and earned his M.A. in English from University of Colorado.

Caravan of Thieves by David Rich.

I’m so happy to welcome David Rich today to share a few thoughts with us.

cncbooks: Caravan of Thieves has already received some very nice reviews. Can you tell us a little bit about it?

David Rich: Rollie Waters is a Marine whose undercover mission during his third tour in Afghanistan did not end well.  Back at Camp Pendleton, the Marines order him to cooperate with a Treasury agent to find Rollie’s father, Dan.  Officers shipped home Saddam’s stolen millions in coffins and Dan has appropriated $25 million for himself.  Rollie cooperates – in his own way.  He hates Dan, but will not turn him over to the authorities. Dealing with Dan is never a straight forward adventure.  To find the money and dispatch the enemy, Rollie has to follow Dan’s clues that lead deep into the past.

cncbooks: How much of you is in your character, Rollie?

cncbooks: Is there one author (mystery or otherwise) who has really influenced your writing career?

David Rich: The first time I ever thought about being a writer was in high school when I read Of Human Bondage, though I have never reread it and hardly remember it now.  I just remember how desperately the hero loved Mildred, who was no good.  I had a few things to say on that topic at the time.  For most of my career I was a screenwriter.  I often read plays.  Harold Pinter and John Osborne were big deals to me.  Both were ace screenwriters, too.  So was Raymond Chandler.  I reread a lot of terrific writers and I’m sure I’m absorbing their styles as I go.  The list is long.  I don’t think any one author has been the strongest influence.  It’s a stew.

cncbooks: If Caravan of Thieves were made into a movie, who do you picture playing each major character’s part?

David Rich: Leading men know how to project charm and danger or they would not be movie stars.  A few who are in their late 50’s to early 70’s would kill as Dan: Tommy Lee Jones, Jack Nicholson, Jeff Bridges come to mind. The list could go on; I’m leaving out a bunch of great actors.   Warren Beatty always reminds me of a con artist, and I mean that in the most flattering way.

Rollie is tougher to cast.  He has charm and humor and brains, but he also has ruthlessness and toughness.  A lot of young actors, guys who can play late twenties to early thirties, have the talent but have not had the roles yet to prove they would be good Rollies.  I might be setting the bar too high. I would love to hear suggestions from people who might see some actor in a way I don’t.

cncbooks: What is the last book you read purely for pleasure?

David Rich: Right You Are, Jeeves by P.G. Wodehouse.  Can’t analyze it, can’t try to imitate it, can’t learn from it, can’t even understand how it’s done.  I just enjoy it and laugh.  It’s a magic trick, like all his novels and stories.

cncbooks: If you were shipwrecked on an uncharted island with no hope of rescue, who is the one person, other than family, you would want with you and why?

David Rich: Do you have Charlize Theron’s number?  If she is otherwise engaged, then someone who knows how to build a boat.  Even Rollie, who is great at facing reality, would indulge in a little hope.

cncbooks: When that ship wrecks, you manage to save your four favorite books. What are they?

David Rich: I’ll assume I can’t choose the complete Shakespeare or Boat Building for Dummies.  Must have Tom Jones; it’s a thriller, a romance, a comedy, and a complete history of civilization.  I’m  grabbing the Evelyn Waugh Sword of Honour trilogy and counting it as one book; if I didn’t have it, I’d spend too much time missing it.  Catch-22, for laughs and for hope of rescue based on some logic I did not see blowing in the wind.  And then, I would need the best how-to manual: Robinson Crusoe.  A lot of my time would be spent writing the sequel.

cncbooks: What is in store for you? What’s happening next?

David Rich: The sequel to Caravan of Thieves is called Middle Man.  I recently completed the first draft. I have another Rollie Waters story in mind.  And, I’m fooling around with a few ideas for other novels.  I have to fool around for a while before I know what I want to spend time on.

Caravan of Thieves by David Rich. Leave a comment

on the review of Caravan of Thieves posted on

September 3rd and then again on today’s post. The winning

name will be drawn on the evening of September 5th.