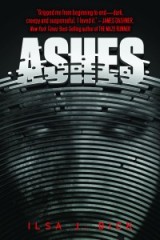 Three young people, strangers to each other, band together along with a dog named Mina for survival in the Waucamaw Wilderness after an electromagnetic pulse has destroyed all electronic devices. Unknown to them, billions of people have died but teenaged Alex, eight-year-old Ellie and Tom, just back from Afghanistan, are faced with other horrors—wild dogs and crazed humans—as they hike in search of help.  Not everything is horrific, though, as Alex has regained her sense of smell, which she had lost to a brain tumor, and that sense has an unusual quality, one that has saved them multiple times. As days and then weeks pass, it becomes more evident that their world has changed permanently and not for the better.

Then they hear about a place where “normal” people have found refuge. Heading to the town called Rule appears to be the best solution, particularly after a violent encounter with a roving band of thieves. Rule, though, may not be the sanctuary it seems to be and Alex will have to find her own way back to sanity.

Post-apocalyptic fiction can be disturbing, fascinating, frightening, heroic and enlightening, regardless of the cause of the disaster, but Ms. Bick has brought a fresh element to this EMP-caused event. Readers are accustomed to the destruction of all things electronic but here we have direct effects on the humans who survive. The idea that there are essentially three classes of people—those with special senses, those who have turned extremely violent and all those who fall between—is very interesting and the author has done a nice job of creating and maintaining a high level of tension.  She also upends the reader’s grasp of the storyline by having a major event take place midway through the book and some readers will be discomfited by the sudden change while others will find it increases the stress and drama and makes the tale even more provoking. The book is longer than many young adult novels but the length is necessary for the story and my reading through the night is because of my own need to know what would happen next, always a sign of a good tale.

Ashes is the first book of a trilogy, to be followed by Shadows and Monsters, and this reviewer hates having to wait till next August or September for Shadows.