“I can’t shovel one more inch of snow,” my man complained last winter, glaring out at three feet of snow blocking our front porch in Cornwall, Vermont.  6’2” Llyn is strong and able but he’s diabetic, and doesn’t have a lot of feeling in his feet. He’s not crazy about mowing two acres of grass either. And I was getting tired of paying $500 each time the fuel truck swung around to our 1835 home—a charming house, yes, but full of holes. So we decided to downsize. To simplify our lives, as Thoreau advised back in the 19th-century, and before him, the 18th-century writers and artists who rejected time-worn laws and traditions.

I was thinking a lot about that Age of Enlightenment and Revolution as I researched my new Mary Wollstonecraft mystery series. I had already published Midnight Fires, the first in Mary’s passionate persona (think A Vindication of the Rights of Woman, 1792), and I had a sequel coming out from Perseverance Press in September of ’11; I’d soon have to begin to promote it. Given the weak economy, I worried: was this the right time to downsize, with its exhausting weeks of  sorting, packing, organizing, finding the right place and, worse, finding a buyer for the current home?

We did it anyway. In April, just as my weeping cherry tree was putting out its fragrant pink blossoms and my giant gingko tree was fanning the breeze with fresh green leaves—just as the economy went bust, and bust again—we succumbed to a moment of madness and listed the old house. The ghosts complained, the house shuddered. We signed a contract with Chris von Trapp, grandson Realtor of Sound of Music fame. “He’ll sell you to a lovely new family, if anyone can,” we told the house.

Instead, he sold us on a condo in the next town of Middlebury. We thrilled at the thought of no more shovelling, mowing, dragging out trash in sealed cans to keep away the wildebeests. We downsized with passion; filled a dumpster the size of a Mack Truck with broken tools, aborted novels, boxes of memorabilia, all sacrificed to the cause of simplicity. “Less is more,” I told my skeptical family.

Meanwhile, banks kept foreclosing, the bottom dropped out of the market, and in the first three months only one couple came to look at the house, clutching purses to their chests. We now owned two houses, two sets of taxes, and the threat of more snow to shovel if no one came to make an offer by late fall. July came and went, with one anonymous looker. I thought of my first published mystery, out from St. Martin’s Press with a nice review—and then thundering silence. 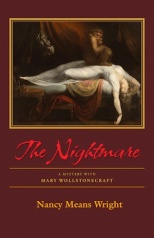 We kept going, lugging heavy boxes of books and old mss to the new condo in record 95 degree heat. “Watch your Heart!” the inscription read on my favorite blueberry Kashi cereal, and I swallowed a couple of aspirins.

We moved in a thunderstorm on July 18. Three men got the furniture out in a single wet hour—the sofa eventually dried out. Our Maine Coon cats went catatonic as their favorite haunts disappeared, bed by lounge chair. The movers made muddy gashes in the lawn as they struggled up the condo hill with bed, dressers, hutch. I thought of Mary Wollstonecraft moving beyond the Paris gates during the bloodiest part of the French Revolution. She hired a carriage for her piles of bound books that would help her write her views on the Revolution, and sat with a dozen tomes on her lap as the horses struggled north. From the window she could see the tumbrils rattling toward the guillotine with their cargo of heartsick victims.

I thought, too, of Mary’s daughter, Mary Godwin Shelley, travelling with a child by horse and carriage, for weeks, to sojourn in Switzerland. There, Mary, who’d earlier lost her firstborn, would write Frankenstein. After that she lost two more babes and her husband, Percy. Did the young mother wish she’d never left her family home in London?  Often, I bet! As we look now for a renter to carry our old house over the long winter, I sometimes kick myself that we’d ever considered a move.

So yes, as the old house moulders away in this awful economy with only two lookers in four months and two houses-cum-gardens to keep up, I can relate to the hardships of the 18th-century Marys—yet feel infinitely more pampered. Unlike them, I have my 4-wheel Subaru that can outrun any horse-drawn chaise to carry my 1000 books from the old house to the new in about twelve minutes. My computer is set up and running in the condo, and cooler weather has arrived, along with copies of my new book and a lovely review from Publishers Weekly. I’ve little to complain about.

On the other hand, it’s quite fitting, I think, that the new novel is called The Nightmare.